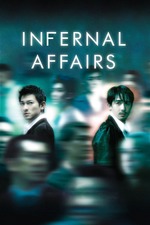 One of the most popular Hong Kong films ever, Infernal Affairs spawned two sequels despite being neither a standard action film nor a feel-good film. Its Chinese title translates as “way of the Wujian,” the deepest circle of hell in Buddhist mythology. While guns blaze and cars roar away from crime scenes, Infernal Affairs is more thoughtful than most Asian or American crime films. The title reflects the psychological and spiritual anguish of its main characters.

In Hong Kong’s police academy, Yan (Shawn Yu) stands out for his many skills, particularly his ability to notice details. He is chosen by the principal (Hui Kam Fung) to be expelled from the school in disgrace as a cover for becoming a mole in Hong Kong’s Triad gangs. Staying behind is Ming (Edison Chen), who will complete his training and rise to a position of power. His superiors never suspect that Ming is a mole for the criminal boss Sam (Eric Tsang).

Following this prologue, the narrative jumps ten years to find Yan (now played by Tony Leung Chiu Wai) one of Sam’s most trusted henchmen. Weary of his undercover life and rapidly approaching burnout, Yan begs Wong (Anthony Wong Chau-Sang), his superior, to be released from his duties, but Wong refuses. (Both Wong and Sam are flawed father figures for the protagonists.) When Sam discovers he has been infiltrated by a cop, he demands that Ming (now played by Andy Lau) find the traitor. Ming’s efforts tip off the police that they too have a spy. Yan and Wong then concentrate on discovering the turncoat, as the film turns into a case of the double agents seeking and fleeing each other.

Infernal Affairs is full of tense scenes, and one of the best, a 20-minute sequence, occurs as Ming sits at his computer keyboard, ostensibly keeping tabs on Sam’s movements while actually sending messages to his real boss. Seeing Wong tapping out Morse code tips him off about the mole in Sam’s gang. Tension mounts as the scene shifts constantly between Ming, Wong, Sam, and Yan, one of several sequences slickly edited by Ching Hei Pang and Danny Pang. An almost equally effective scene involves one of the gang members (Man-Chat To) discovering and concealing Yan’s secret because of his respect for his friend.

The moral complexities of Infernal Affairs comes from the discomfort both protagonists experience as spies. These double agents are psychological doubles as well, and Sam and Wong are also opposite sides of the same coin. The characters reflect the schizophrenic nature of Hong Kong itself, a capitalist society slowly converting to the socialist ways of the mainland. This element does not detract from the film’s more universal examination of such themes as identity and loyalty.

Ming admires Yan during their police training, and the admiration only increases when he realizes his old comrade is his dangerous enemy. Like a character in a John le Carre novel, Ming wants desperately to protect his secret while keeping Yan safe from Sam at the same time. Yan’s weariness only intensifies when he learns Ming is a traitor. Obviously, this predicament is not going to have a happy resolution. Directors Andrew Lau and Alan Mak never let the tension flag in this remarkably well-paced film, full of unexpected twists and turns. The camera moves frenetically, but the technique, even the use of slow motion, never becomes showy for its own sake.

An influence on Infernal Affairs is Man on the Brink, Alex Chang’s 1981 film about a police mole in the Triads remade by Andrew Lau in 1994 as To Live and Die in Tsimshatsui. Lau and Mak have also obviously studied the techniques and themes of such Western crime films as White Heat, Point Blank, Heat, Donnie Brasco, and Jean-Pierre Melville’s existential thrillers. Like Melville’s films, Infernal Affairs, photographed by Andrew Lau and Yiu-Fai Lai, with the great Chris Doyle as consultant, has a bleached-out look, with steely shades of blue and gray dominating and underscoring the film’s moral ambiguities. Lau preceded Doyle as Wong Kar Wai’s primary cinematographer.

Like many Hong Kong crime and action films, Infernal Affairs presents a male-dominated world, with only token appearances by women. Ming’s girlfriend (Sammi Cheng), a writer, is wrapped up in their move to a new, better apartment. Cheng has a good moment when she discovers that Ming is not what he has seemed to be. When Yan bumps into an old lover (Elva Hsiao) he has not seen in years, she lies about her daughter’s age so that he will not suspect the child is his. This revelation is not an easy irony but an indication of how much Yan has sacrificed for his work. In the world of Infernal Affairs, layers of secrets and lies lurk beneath both murky and placid surfaces. Yan’s only substantive connection with a woman comes from his visits to his court-mandated (because of his criminal activities) psychiatrist (Kelly Chen). Yan spends most of these sessions catching up with his sleep while the sympathetic Dr. Lee Sum Yee gazes at him. These naps do not prevent Yan’s confession that he is not really a criminal in one of the film’s most moving scenes.

Leung helps make Yan an unusually complex character, conveying both Yan’s distress over his uncertain status and his anger at himself for not having a real life. Leung, who also plays an undercover cop in John Woo’s Hard Boiled, demonstrates Yan’s existential angst best in the meetings with Wong, as he pleads for release from his hell while acknowledging that he cannot escape his fate.

Lau, no relation to Andrew Lau, has a less flashy part and is a bit stoic at times, yet he ably conveys Ming’s mixed emotions. Lau excels especially during the inevitable showdown between Ming and Yan. Sam is by far the most colorful character, and Tsang steals scenes as the duplicitous boss who enjoys fooling the police as much as he does theft.

Infernal Affairs gets off to a somewhat confusing start, mostly because the actors playing the young Yan and Ming look nothing like Leung and Lau, with Chen also being much taller than Leung. Once the byzantine plot gets rolling, however, the excitement never lets up. The film is equally satisfying as a thriller and as a character study. It is just about perfect, an unusually sophisticated action film.