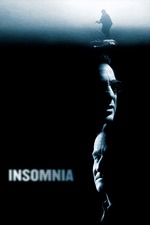 Christopher Nolan followed Memento, a low-budget ($5 million) masterpiece, with an unusual choice, a much-bigger-budget ($50 million) remake of a 1997 Norwegian film, with a screenplay by someone else, Hillary Seitz, and three Oscar-winning actors in the cast. Insomnia is not a masterpiece, but it’s a visually stylish, emotionally engaging, masterfully acted film.

When a 17-year-old girl (Crystal Lowe) is beaten to death in the small town of Nightmute, Alaska (the halibut-fishing capital of the world), police chief Charles Nyback (Paul Dooley), a former Los Angeles cop, asks for help and is sent two detectives, Will Dormer (Al Pacino) and Hap Eckhart (Martin Donovan). This unusual move comes about because Dormer and Eckhart’s homicide division in Los Angeles is undergoing an internal-affairs investigation, and the detectives will benefit from being out of town. This plot development is the most notable departure in Seitz’s screenplay from Erik Skojoldbjaerg’s original.

The proceedings are complicated by a secret held by Dormer. What he is hiding is not revealed until near the end of the film, but in keeping with Nolan’s propensity for time shifts, there are fleeting flashbacks to what he is hiding. There are also increasingly lengthy flashbacks to the girl’s murder, recalling Mike Nichols’ treatment of Snowden’s death in Catch-22. (Executive producer Steven Soderbergh, a Nolan mentor, shares commentary with Nichols on the Catch-22 DVD.)

Dormer sets a trap for the killer at an isolated cabin, but when his plan is fouled up by a clumsy policeman, Farrell (Larry Holden), the murderer escapes. Pursuing him in a thick fog, Dormer accidentally shoots and kills Eckhart. Or is it an accident? Has Dormer taken advantage of the situation to save himself from his partner’s implicating him in wrongdoing? Did he subconsciously want to kill Eckhart? In the original film, the shooting is clearly an accident. Seitz’s change intensifies the protagonist’s guilt.

The fleeing villain drops his gun after wounding Farrell, and Dormer retrieves it to protect himself and manipulate the evidence. Earnest young detective Ellie Burr (Hilary Swank) has studied Dormer’s cases and heroworships him. Assigned to investigate the Eckhart shooting, she is eager to take matters as they seem, but Dormer, perversely, encourages her to look more carefully at the case. He has lost his soul but can save hers.

The killer begins taunting Dormer with anonymous phone calls, offering to cover up Dormer’s crime, which he witnessed, if the detective will let him go free. Dormer eventually discovers his adversary/accomplice is pulp-mystery writer Walter Finch (Robin Williams), who lives in a nearby town, and confronts him only to see that Finch is the one in control of the situation. Dormer feels helpless as Finch plots to frame his victim’s sullen boyfriend (Jonathan Jackson). The odd relationship between the two is a variation on the Bruno-Guy relationship in Strangers on a Train.

Complicating matters even more is Dormer’s inability to sleep. Finding himself in Alaska during the annual period of constant sunlight, the detective cannot ignore the light coming through the window of his hotel room. (This element is emphasized much less than in the original film.) Finch tries to exploit Dormer’s sleeplessness in manipulating him. Dormer’s name not only suggests windows but the sleeping dormouse encountered by Lewis Carroll’s Alice. Nightmute, where the night is mute, is Dormer’s own Wonderland in which logic and reason are turned upside down.

Seitz’s screenplay is generally wittier and more clever than that for Skjoldbjaerg’s much darker film, which has a decidedly Scandinavian temperament. Her ending, however, while it works, does not the same emotional kick as that of the original.

In interviews, Nolan said that immediately upon seeing the original film he wanted to make his version and that he had not seen Skjoldbjaerg’s film since. While the newer film has a more energetic style, thanks in part to Dody Dorn’s editing, it looks much like the original. Cinematographer Wally Pfister makes Nightmute a bleak, gloomy, end-of-the-world spot where anything is likely to happen.

Burr acts as the viewer’s conscience, wanting Dormer to prevail, needing to save him, but mistrustful at the same time. Swank conveys these conflicting emotions quite effectively. Her best moments come when Nolan simply shows her thinking: piecing together the evidence, refusing to jump to conclusions, going back over her thought processes to make sure she has it right. Swank takes a comparatively underwritten role and provides some depth by knowing how to respond to the camera.

Williams, seemingly addicted to portraying pathetically sentimental, misunderstood characters, is to be admired for tackling a character without any redeeming qualities yet obviously not a monster. Showing amazing, for him, restraint, Williams never dips into his tattered bag of manic tricks, but he may be too low-key. Pacino needs a fellow actor who offers more of a challenge to make Finch a worthier opponent for Dormer. Nicky Katt, who plays the detective whose investigation is taken over by Dormer, has shown with such roles as the hit man in The Limey that he would have been an excellent Finch.

Insomnia’s greatest virtue is yet another magnificent performance by Pacino. Comparing the two versions of the film shows the difference between a very good actor, Stellan Skarsgard in the original, and a truly great one. While Skarsgard’s character falls to pieces as the film progresses, Pacino, thanks to the pending investigation of Dormer’s possible corruption, is a mess from the first shot: haggard, forlorn, truly tormented. What transpires in Nightmute only makes a bad situation worse.

Pacino’s Dormer is a contrast in confidence and insecurity. The former is displayed, in one of the best scenes, when Dormer examines the dead girl’s body and draws conclusions missed by the local police. Pacino subtly conveys that the detective has both seen the depths of human depravity and identified with these horrors. Pacino expresses Dormer’s growing exhaustion by making his voice progressively, almost imperceptibly weaker until it reaches a whisper. No one other than Pacino could have captured so well Dormer’s dual nature of victim and victimizer. He is a master at capturing moral ambiguity.

Also see my reviews of Nolan's Memento and Batman Begins and my ranking of Pacino’s performances.