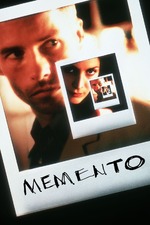 Since Quentin Tarantino fractured the traditional narrative approach to film noir by presenting Pulp Fiction as three separate but overlapping stories, filmmakers have been trying, with mostly moderate success, to out-Tarantino Tarantino. The first to come close to Tarantino’s achievement was Christopher Nolan with Memento. Nolan tells his story backward not just for novelty, not for easy irony, not for a trick ending, not just to explore the conventions of the genre, but to make a philosophical statement about the nature of truth. Although it bears superficial similarities to Harold Pinter’s Betrayal, Memento is highly original in its treatment of time.

Leonard Shelby (Guy Pearce) is a former insurance investigator trying to find the man who raped and murdered his wife (Jorja Fox). The problem—and what a problem—is that he has no short-term memory after being struck in the head by his wife’s assailant. Leonard can recall everything about his life up to his wife’s death, but since then, he can remember only what has occurred a few minutes earlier. He does not even know how long ago his quest began. To keep track of the evidence he has accumulated, he has the clues tattooed on his body. “John G. raped and murdered your wife” is written backward across his chest so that he can read it in a mirror—a backward clue in a backward tale. Leonard’s “facts” include that he is pursuing someone named John or James whose last name begins with G and who is a drug dealer. He also carries an annotated version of the police report of the murder and Polaroid photographs of things and people he wants to make certain he does not forget, with messages on each.

Memento begins with Leonard killing the man he believes is his prey. The rest of the film delineates the events leading up to this execution as Leonard travels about the seamier side of Los Angeles. Scenes that do not seem in any way ironic gain irony after what came before is revealed. Nolan’s method is to end each scene with the beginning of the previous one. There are also flashbacks to the wife’s murder and to fragments of the couple’s life together and black-and-white flashbacks to Leonard talking on the telephone to an unknown—to the viewer—listener about an insurance case he investigated.

Including the story of Sammy Jankis (Stephen Tobolowsky) takes Memento to another level, making it more than just a talented filmmaker showing off his style. Sammy also suffers from short-term memory loss after an accident. Leonard’s job was to decide, after medical and psychological examinations, whether Sammy was faking the condition to collect on his disability policy. Leonard decides that while Sammy is not faking, his condition is psychological, not medical, and therefore not the responsibility of the insurance company. His decision has tragic consequences for Sammy’s desperate wife (Harriet Samson Harris). Sammy’s plight parallels Leonard’s on several levels. One tattoo reads, “Remember Sammy Jankis,” but Leonard chooses to ignore the lesson of Sammy’s story for reasons not revealed until the end of the film. He has earned his living from determining whether people were lying but finds himself in a situation where the truth is considerably murkier.

The other central characters are Teddy (Joe Pantoliano), who claims to be Leonard’s friend, and Natalie (Carrie-Anne Moss). The message on Teddy’s photograph reads, “Don’t believe his lies.” Is Teddy his wife’s killer, is he a policeman, is he a drug dealer, is he trying to prevent Leonard from discovering the truth, is he using Leonard for his own purposes, or is all of this true? Because Teddy is the man executed at the beginning, we hope for Leonard’s sake that he turns out to deserve it.

Then there is Natalie, a bartender who has something to do with drug dealers. Her photograph reads, “She also has lost someone. She will help you out of pity.” But can Leonard really trust her? He suspects that someone is using his condition to direct his attention toward someone other than his wife’s killer, and Natalie does set Leonard and drug-dealer Dodd (Callum Keith Rennie) against each other. Is Teddy or Natalie manipulating Leonard, or is he simply paranoid.

Discovering the answers to these and related questions keeps the viewer enthralled, of course, but Memento is much more than a stylish mystery. Leonard’s search and his uncertainties about everything he has not written on his body make the film a metaphor for the need for truth and the often extreme difficulty of attaining it. And what if his clues are not all they seem? Nolan’s repetitive technique of showing bits of scenes more than once emphasizes the contemplative nature of the film. Just as Leonard gathers evidence and tries to interpret it, so does the viewer. Just as Leonard is handicapped by not remembering what just happened, the viewer is at a disadvantage by not seeing the events in a linear fashion. Traditional mysteries build up the clues, but Memento starts with the clues—and an apparent resolution—but denies them the context in which they would add up logically.

Nolan’s postmodern thriller forces the viewer to think in a different way than does the typical mystery. Hundreds of films, novels, and stories have trick endings that change the way all that has come before has been seen. Each scene of Memento changes the way the previous scene is perceived. It is obvious Nolan is leading up to an ironic conclusion, but it turns out to be ironic in an unexpected way. While hundreds of novels have employed unreliable narrators, the technique is extremely rare in films. Because of his condition, Leonard is not even aware of the possibility of his unreliability.

In an Independent Film Channel interview with Elvis Mitchell at the time of the release of Memento, Nolan declined to acknowledge the direct influence of any film-noir precursors, admitting only a debt to the unconventional narratives of Nicolas Roeg. His film does, however, fit comfortably into the genre’s tradition. Black Angel, in which an alcoholic tries to solve his wife’s murder only to discover he is the killer, is one of several films noir built around amnesia-related plots. Memento strongly resembles the best revenge film noir, Point Blank not only in its plot and setting but in staging most of its scenes in bright sunlight, providing ironic counterpoint to the dark goings-on.

The casting is also film noir inspired. Pearce is one of the stars of L. A. Confidential, Moss is in The Matrix, and Pantoliano appears in The Matrix and Bound. Tobolowsky may have been cast because of his role in Groundhog Day, which Memento resembles through its repetitions of scenes and its trapped-in-a-time-warp plot.

Although Memento is only Nolan’s second film, it already shows he is a master storyteller. (Your humble correspondent is putting off seeing Tenet until one day when his brain is hitting on all four cylinders—whenever that will be.) The film begins with a hand shaking a Polaroid photograph which, instead of becoming clearer, fades into blankness, deliberately making the viewer unsettled and in the filmmaker’s control. A cruel joke with a tankard of beer and the consequences of Leonard’s misreading a number on one of his notes are other examples of Nolan’s inventiveness.

Nolan is aided by Wally Pfister’s atmospheric cinematography and Dody Dorn’s precise editing, especially with the brief flashes of Leonard’s past life which often interrupt his thoughts. Dorn and Pfister help make the film move smoothly from the present—that is, the past—to a different past and from color to black and white.

Many actors would have presented Leonard as a gloomy, pitiful soul, but Pearce makes him reconciled to his condition and resolute, almost at times cheerfully so, about fulfilling his quest. Pearce narrates some of the film in a dry, deadpan voice and is particularly good when, in the middle of a chase, Leonard cannot remember if he is chasing the man with the gun or is being chased.

Moss stands out when Natalie loses her temper and tells Leonard what she truly thinks. Pantoliano makes Teddy delightfully ambiguous. Is his friendly but sarcastic surface the real Teddy or just a masquerade? Pantoliano is at his best when Teddy insists upon calling the hero Lenny and claiming to forget that Leonard hates being called that and when Teddy rolls his head when Leonard asks if he has told him about his condition or about Sammy. The tender despair Harris conveys as Mrs. Jankis provides the film with a few poignant moments. Mark Boone Junior is amusing as a sympathetic but sly motel manager who rents Leonard two rooms because he can’t recall paying for either.

Reviewing Memento in National Review, the notoriously cranky John Simon, who once scared the bejesus out of me when we almost collided rounding a corner on the Lower East Side, said that anyone claiming to understand the film is a liar. The film does not explain how Leonard knows the name of the killer, but otherwise it is relatively easy to follow for anyone willing to pay attention, a quality too few films in recent years have called for. Memento is superbly entertaining and rewarding because Nolan forces the viewer to work almost as hard as Leonard.

Also see my reviews of Nolan's Insomnia and Batman Begins and my review of Somewhere in the Night, Joe Mankiewicz’s amnesia noir.