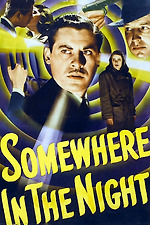 With Norbert Brodine's atmospheric lighting, rain-slicked streets (though set in Los Angeles), a swanky nightclub, a sultry torch singer, a villain with a foreign accent, a muscle-bound lug, and moral ambiguity to burn, Somewhere in the Night is a terrific example of film noir.

George Taylor (John Hodiak) wakes up in a military field hospital in the Pacific with no memory of who he is. Returning to Los Angeles, Taylor -- who instinctively knows this is not his real name -- finds an old letter from his friend Larry Cravat and tries to track down Cravat to find out who he really is. With the help of singer Christy Smith (Nancy Guild), nightclub owner Mel Phillips (Richard Conte), and cop Lt. Donald Kendall (Lloyd Nolan), Taylor learns that Cravat and another man were involved in stealing $2 million in loot shipped to the United States by a Nazi officer.

The film noir elements include amnesia, loss of identity, a tormented veteran, involvement with a good woman and a very bad one (Margo Woode), and general uncertainty about who the good guys and bad guys are. Viewers who want to try to figure out the identities of Cravat and his fellow thief are advised to wait for the plot twists at the end. Such revelations are also central to noir.

Joseph L. Mankiewicz, directing the first feature he initiated, is a storyteller more than an artist, but this film (thanks to Brodine) is much more distinctive visually than is usual for him, with lots of shadows and fog and good blending of backlot shooting and location scenes like the one in L.A.'s Bunker Hill neighborhood. Mankiewicz's playful touch is evident throughout, indicating he did not take the farfetched story too seriously. He pays tribute to his friend Howard Koch by having the writer-producer's name appear on a hotel register, and a casual reference to the concept of double indemnity is a nod to his pal Billy Wilder. At the end of the movie, Kendall says the case's police report will be longer than Forever Amber, the bestseller Fox was having extreme difficulty bringing to the screen at the time.

Mankiewicz is limited somewhat by his second-string cast. Hodiak, best known for his role as a seaman in Hitchcock's Lifeboat, is more than a bit stiff, though his awkwardness is fitting for the confused character. Unless the lead is Bogart or Mitchum, the stars in this genre do not really matter all that much. Look at Dick Powell in Murder, My Sweet or Ralph Meeker in Kiss Me Deadly. Atmosphere and plot complexities are the real stars.

Starlet Guild, making her debut in the Lauren Bacall/Lizabeth Scott role, is too wholesome but cute. Conte is surprisingly good, and there are many wonderful character actors such as Woode, Sheldon Leonard, Josephine Hutchinson, Jeff Corey, Harry Morgan, and Whit Bissell, to support the leads. Fritz Kortner is especially good as an oily manipulator, the type of role usually associated with Sydney Greenstreet.