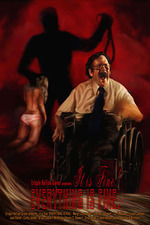 It Is Fine! Everything Is Fine.

A commendable effort from one of the most original voices in cinema. It is based on a screenplay written by a man with cerebral palsy who also stars as the lead. As Glover himself explains it, (If you've seen this film chances are it was presented along with a q&a by Glover who constantly tours with it) this is ultimately a film about catharsis. Steven C. Stewart wrote it as a sort of 1970s exploitative murder mystery/porno. With him as the muderous lead it adds the dimension of power and struggle. This was a man who in spite of his physical and verbal handicap, had his full mental capacity intact and yet was locked in a nursing home and pretty much treated as a prisoner. This serves as his revenge fantasy, where both his sexual desires and frustrations are given free rein. The result is a sexually explicit, exploitative film, that plays a lot like fetish porn (not because he's disabled but because he has a fascination with women's hair; combing it, stroking it, etc) and yet somehow, manages to feel personal.
As much as I appreciate this film, and what both Glover and Stewart were going for, as a film on its own merits it comes off as rather repetitive, amateurish, and ultimately boring once the novelty wears off.