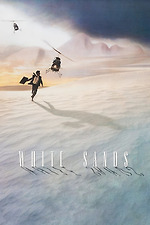 I have such a weird relationship with this movie. I first saw a clip of the ending on TV or somewhere, and it was noticeably great so I later watched the rest of the movie expecting to be thoroughly ensorcelled in even more greatness. Much to my consternation/chagrin/befuddlement, I thought the ending (and even the beginning!) were great, but somehow I found the film as a whole disappointing. But for some reason I couldn't shake the vivid memory of those scenes that I liked so much.

FLASH FORWARD to 15 years later and I decided to give it one more try. And I'm so glad I did, because now I can finally appreciate its worthiness and I'm reminded again of why I love desert noir. It's an about-perfect thriller with just the right kind of mood and scenery I like, an elegantly simple premise that slowly builds up into multiple layers of twists, conspiracy, and subterfuge leading up to the striking if a little implausible ending that's permanently emblazoned in my mind.

It's riveting and, dare I say, sexy: Dafoe and Mastrantonio have really good chemistry (I didn't realize that was possible with Dafoe), and the shower scene and subsequent events are really something else. The rest of the cast is fantastic, with Sam Jackson, Mickey Rourke, Maura Tierney, and failed presidential candidate Fred Thompson. There's a scene where they're at an arms deal and Thompson fires off a bazooka just to show that it works. Can you imagine being at a business deal and a guy just casually blows up a truck with a bazooka like it ain't shit?

The only quibble I have with this movie is that I would have preferred to see more done with Mastrantonio's role, since I really liked the character and I appreciated that she wasn't a typical femme fatale. The ending was nice, but....a little too nice. I was expecting something dark and twisty to arise in the relationship since that was the general thrust, but instead it didn't lead to anything, which didn't quite seem to fit the complex nature and tone of the rest of the narrative. But that all said, I did like what it did for the protagonist, who comes out of the story with a rare mix of both relatability and admirability.