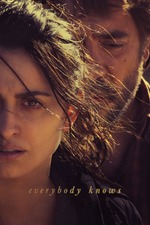 I watched it on Friday and I was thinking about it before I wrote anything, because my favorite actor - the incredible Javier Bardem!
Well, contrary to what a lot of people wrote, I didn't think the film was at all slow. I found the film very engaging and did not even notice the 2h13m to pass.
Bardem's performance is wonderful as always! It goes without saying that he outshines any actor whenever he is on the scene. It even outshines Ricardo Darín, who we all know in advance the excellent actor he is.
Penélope Cruz is in a more restrained way than usual and I liked to see that. I get a little tired of the "hysteria" always present in her voice and in her posture, whatever her performance. Thankfully, that was an exception here and in Amenábar's film "Abre los Ojos".
The story is deliciously novelistic but without falling into the ordinary and not compromising the mastery with which the film is directed.
The scenery is wonderful, always with an Iberian hint that we can almost smell.
I believe that the title of the film is a purposeful spoiler for the biggest revelation of it ... because after all everyone in that village was already very suspicious, even without the true absolute certainty, and I thought that was very intelligent on the part of the director.