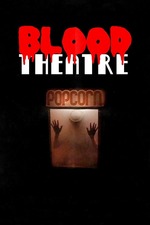 Mean old Amazon Prime took down Double Exposure early. I was supposed to have 'til 3AM EST or even later. So, I had to switch it out with another movie and this was one of the shortest available. 20 minutes shorter than Double Exposure.

I actually had a lot of fun with this, contrary to more than half of my followers who've seen it. And I do have a few quibbles. First of all being, while I enjoyed the whole cast which has more women than men in it, the movie is pretty sexist in ways you might not have picked up on. There's "catfighting" (abhorrent term, obviously) and women slapping each other, of course, but the knife-wielding killer also manages to kill woman after woman until finally he's struck down... by a man. The first man he tries to kill. Down he goes. Right to the floor. Sure, he gets up a couple minutes later but he gets to pack it in after that. The only men he would've targeted are killed in ridiculous / supernaturally ominous accidents and he spends the remainder of the film chasing women again.

After that, all the other problems pretty much converge into total nonsense. This movie makes absolutely no sense. Why are we even bothering to watch the rapacious theater owner be mugged in the street by hooligans given that, A) it happens before he gets to the convention hall and realizes he's a day late in the first place, B) all he has in his briefcase are bootleg z-grade cash grab movie spoofs? All of the posters in his office and lining the lobby of his (4-screen) theater are spoofs.

I'm not afraid to say this was a breath of fresh air after Bloody New Year, which shares a striking series of similarities. I suppose there aren't a significant amount of good reasons to say this is better. I just really enjoyed it more. Mary Woronov is excellent, and Joanna Foxx is 90's-Jenny-McCarthy level magnetic, funny, and audacious. The fact she's written as the loudest, most erratic and pushiest person in any room might have something to do with that. But she's just something to behold. Trust me.

It borders on Airplane!'s gag-a-minute routine but for the majority of the first half the gags feel consistent to one person's sense of humor. A wry, campy sense of humor I mostly take to. I mean, really... it could have been worse. Much cornier: Saturday the 14th.