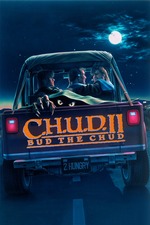 3. Robert Englund cameo. No dialogue, in a panning shot, As Himself, and in a crowd. He's just standing there, walking a trick or treater. This film may have invented the South Park cameo nearly a decade in advance.

4. Sarah Berry from Evil Dead II cameo. Out of the blue, she's just there. In a crowd. With an umbrella. In a green sweater. She gets dialogue.

5. Mick Garris's wife Cynthia (who often cameos in his films, and once in Dario Argento's Jenifer) wrote the theme song. Far as I know, he had nothing to do with this movie. She just wrote the lyrics to the theme song, "Bud the CHUD."

6. Oh yeah, Nicholas Pike does the music score. One of the best horror composers.

So, this will undoubtedly disappoint a few people. Not only does it have absolutely nothing to do with the original film but it's a real PG affair. It is rated R but there's no nudity, no gore, almost no blood, and I don't remember any cursing. I can only imagine the reason it's R is because high schoolers re-animate the dead in it. But the secret to its success is its absurdity. As someone who was once seriously disappointed in Night of the Creeps and (still) hates Re-Animator, I love the moments that really poke fun at the latter especially. The first 10 minutes are not good and the ending slows things down a bit. But it improves a lot within the central hour. The characters are fun, the music is excellent, and it actually feels like a fairly unique absurd teen comedy. You will scratch your head more than a few times at choices made with the dialogue, the editing, and scenes that feel improvised at the last minute. But the energy level is so high and the actors are so engaging, and it's so much more fun than it should be. What it lacks in scares it makes up for in entertainment value.