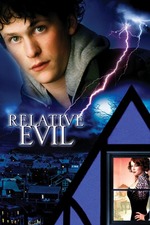 Wow: you have never, in your lifetime, ever seen a movie advertised as falsely as this one. That cover is great, isn't it? With the house shaped like a triangle, Jennifer Tilly in slinky black catsuit dress, and that lightning bolt cracking into that almost Salem-looking town... so, what is the movie? A campy mischief mystery where it's revealed by the end that Tilly's a witch and Boy on Cover must use a magical amulet to strike her down? No. Okay, so it must be an over-the-top erotic thriller stuffed with teeny bopper dialogue about stalkery Tilly trying to kill Boy on Cover every chance she gets. Right? Nope. Try again. It's like The Craft meets The Good Son?

It's literally a psychological drama about a teen from a dysfunctional but "trying" family, fresh out of rehab, trying to get money to pay off his drug lord friend who he owes $3,500 while his stepfather works him to the bone because the teen's drunken accident cost his family their entire lives- financially. This is actually 80% close to being an honest, real life situation. A Lifetime TV movie wouldn't end with the person in rehab slaving away for $200 a week to pay off some kind of $30,000+ debt (counting the lawsuits involved in the accident). Only Tilly pushes this into unrealistic territory with some kind of mysterious hired hitman subplot that hinges on a tiny twist toward the end. The movie is still in essence a flick about how, under better circumstances, the recovering addict almost had a shot at redemption.

I really have to hand it to this little movie. Of course, I respond better to more personal, lower budget, immediate dramas than movies trying to fluff themselves up. This is a dirty subject with dirty people living in a dirty, nowhere town and that's how this movie feels. The actors did a perfect job making me feel like these were real people (shy of Ethan Embry, as always). Storywise, it's clear a lot of thought went into this: especially the motif with the snow and the callback of the ending to what the counselor said about Jonathan Tucker's addict teen needing an audience. The movie's use of music gets a lot better after the first 15 minutes, flashbacks are utilized very well, the stepfather character is extremely well-written and relatable. Maybe more than he would be, but I'd say that's for the better. It's unpredictable when it should be. And it's more fair than it could have been.

It might measure up as barely an effective time waster but I think there's a little more here. Either way, it really worked for me.