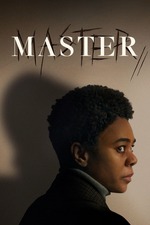 "I let you get too comfortable."

There are about three amazing films in here, it's just a shame they couldn't settle on one.

I love dark academia. Like, real dark academia. Not "ooh pretty people in black clothes and old buildings." Master perfectly taps into that and it's a sign of its wasted potential that it's MUCH scarier when it places its protagonist, Jasmine, crowded in a room full of white people shouting along to rap lyrics, and the true nightmares of sharing a tiny, confined space with a posh English girl called Cressida who met quite a lot of her classmates already while in high school because they went skiing together. (Been there, done that. As the roommate that had to push past a bunch of jolly hockey sticks to get to her own bed, not as the skier.)

Also, perhaps the most tense I was throughout the whole film was in the scene where Jasmine lets the guy she likes take her to another room where they're alone and mix her a drink. No, not just pour it. She lets him MIX it and then she drinks it all.

The problem is that Master crowds out this genuine atmosphere with a lot of really stupid scares. It seems like it has to remind the viewer it's a horror movie every five minutes, which actually has the exact opposite effect. As a result, nothing really grows, despite the eerie atmosphere of the college campus, and the story itself is overloaded with about seven different subplots. Ghost story? Cult movie? Social thriller? Why not all three?

Where it ultimately goes is fascinating, but it was a huge mistake to leave that twist until so late. Although, yes, academia did leave its mark on me, because I have to brag that I KNEW IT.

Before that, it just lacks moral clarity, and wastes so much time on pointless storylines. Quick question for anybody else who's seen it: Jasmine's roommate was (gang?)-raped in the woods, right? I mean, it says something that that incredibly serious subplot is relegated to two tiny and confusing scenes. Rather than going for a shock - we don't need shocks every 2 minutes, they have the opposite effect! - this would have been such a good movie if they had simply cultivated what they had with more patience and trusted the audience to follow their thesis without feeling like they had to trick the audience (a misguided idea, because most audiences are smarter than that) with genre tricks, rather than thinking about how the two could feed into each other authentically.