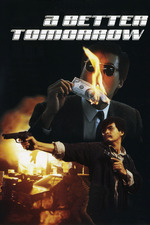 A BETTER TOMORROW is a fantastic heroic bloodshed movie about middle aged gangsters who've no vitality left and desperately crave a life of some consequence.

I wanted to slight it for some of its cheesiness early on--a goofy smile is practically the only character development Chow Yun-Fat gets in the first half of the movie, for example. But by the end, the dramatics are some kind of glorious as tragic heroes cry in the rain of a thousand bullets.

Much like THE KILLER, each side of the law is an arbitrary distinction that condemns everyone to equal dissatisfaction. Woo makes that unfair binary feel so concrete and real, it might as well be a genetic condition. Cops and robbers, a miserable lot.