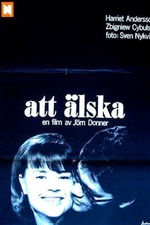 To Love is at its best as a light comedy of sexual manners, a fantasy of facility that I would like to believe with all my anti-puritanical heart but that in the final analysis my Rock of Ages mind cannot. Not that I particularly care to make a final analysis when the tantalizingly tousled Harriet Andersson—and it's the second s that makes all the difference—is on screen evoking the prodigious nostalgia of her Ingmar Bergman period, when the pouting perversity of her Cocteau face was coupled with the sensual complicity of her Rubens body in memorable portrayals of such tasty morsels as the trampish misfit in Monica, the tomboyish maiden in Lesson in Love, the tigerish mistress in The Naked Night, the tempted mannequin in Dreams, and the tart maid in Smiles of a Summer Night. Fittingly enough, one delectably gratuitous dream sequence restores her pre-Bergman status as a burlesque stripper, and this is one occasion when I prefer to let content transcend context.

To Love is the second film of Jörn Donner, a Finnish-Swedish critic and a (yawn) Bergman biographer. (His first, as yet unreleased in America, also starred Harriet, and where is it, you evil American distributors?) Donner has chosen to treat his subject objectively, and this raises an interesting problem of directorial point of view toward material lacking both dramatic conflict and psychological contrast. Donner begins with an interesting couple in Miss Andersson and Polish actor Zbigniew Cybulski, she a repressed young widow, easily exhausted by meaningless mourning, he a footloose travel agent, casually complacent about his many conquests. They meet at the funeral of her husband, court shortly thereafter, and consummate their courtship immediately after that—and that is pretty much that. There is never another man, and never really another woman, although previous mistresses are dredged up from time to time to make conversation. The girl's mother and little boy are on hand to provide the comedy relief of enlightened attitudes, and a vinegary feminist is squeezed into the plot to dramatize the desirability of sexual emancipation. The bulk of the film is concerned with bedroom intimacy, but Donner ducks the aesthetic problem of duration with the kind of elliptical editing we now recognize at film festivals as "modern." Unfortunately, the objective approach is unable to render the delirious vertiginousness of the subject. You see neither the woman through the man's eyes nor the man through the woman's. You are always looking at both of them together from a studiously objective viewpoint, but there is not enough social and psychological detail to study in this manner, and the option of transforming the bedchamber into a metaphoric universe of subjective emotion is sacrificed for no good reason. For all of the obviously objective charms of the too, too solid flesh of Harriet Andersson, she should be, above all, a sentient being for the discerning director. Ultimately, what she feels in her face is more revealing than what she shows of her body.

Not Andrew is using Letterboxd to share film reviews and lists with friends. Join here.

A Woman Is a Woman