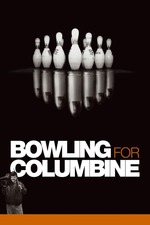 Why Columbine?–a question regarding the American propensity for violence–gets buried in Michael Moore’s guiltathon documentary Bowling for Columbine. But that speculation, with its cosmic overtones and deeply personal reflection, actually is forthrightly addressed in All or Nothing, Mike Leigh’s newest film about British working-class anxieties that goes to the heart of everyone’s.

Moore uses the 1999 Littleton, CO, high school massacre to grab attention that Mike Leigh deserves. Bowling for Columbine represents a pop form of what used to be called yellow journalism–sensationalized reporting to catch the eye of a jaded, apathetic public. It happens to be the same audience (and critical fraternity) that is slow to recognize Leigh’s seriousness. Many people who expect only documentaries to deal with the politics of contemporary life balk at such realistic emotional dramas as Leigh’s High Hopes, Life Is Sweet, Naked, Career Girls. His most celebrated film Topsy-Turvy was completely–deliberately–misunderstood by Anglophiles as a celebration of Victorian-era theater (as if it were a Merchant-Ivory musical). Few will mistake the intention of All or Nothing, the first inarguable masterpiece since Minority Report. As if setting the record straight after Topsy-Turvy, Leigh’s artistry has advanced into searing clarity about his interest in social brutality, personal alienation and hope.

In a plot structure to rival Trollope, Leigh intersects three families in a Southeast London housing estate (plus their coworkers and friends). It’s a view of how we live today in which assorted family dramas reflect modern social conditions. Phil and Penny (Timothy Spall and Lesley Manville) are a cabbie and his cashier wife getting by with two overweight, disaffected teenagers, Rachel and Rory (Alison Garland and James Corden). Penny’s fellow cashier Maureen (Ruth Sheen) is a single mother worried by the Punch-and-Judy show of her teen daughter and boyfriend Donna and Jason (Helen Coker and Daniel Mays). Another estate housewife, Carol (Marion Bailey), is a drinker married to Phil’s cabbie partner Ron (Paul Jesson), and is the mother of another bitter youth, Samantha (Sally Hawkins). If you don’t see yourself (or your friends and neighbors) in these Brits, then you don’t live on this planet. That’s the thrill of Leigh’s approach to everyday melodrama: an otherwise ordinary, kitchen-sink view of England rises to heartstopping universality. Leigh finds large significance in common family tension.

Moore’s mocking documentary works in an opposite direction–concentrating on the horrific events at Columbine High School as the lead-in to BIG issues. It turns out to be a belittling direction. I’m not sure if it’s more shameless or appalling that Moore can look at Columbine and see only the need for a gun-control lecture. Lacking Mike Leigh’s humane insight, Moore irreverently goes after the National Rifle Association (an organization Moore belonged to since his years as a teen marksman growing up in Michigan), focusing on the Columbine tragedy as the result of lax gun laws and America’s violent, fearful, racist culture. Though his argument is literally wide-ranging (from Michigan to Colorado, California to New York, the post-9/11 present and the American government’s near-and-distant geopolitical past), the approach stays superficial. Moore mostly avoids the personal travails that give All or Nothing its unforgettable power. In Bowling for Columbine, the tendency toward caricature and comic humiliation makes one question Moore’s argument. He’s polemically courageous, but he stumbles over humanity.

News addicts and disaster junkies might be waiting on a movie that answers all their questions about Columbine (and Moore includes some shocking surveillance camera footage that I’d never seen before of Harris and Kliebold committing the cafeteria shootings), but personal investigation (the approach that distinguished Marcel Ophuls’ impressive 70s documentaries A Sense of Loss, The Memory of Justice and The Sorrow and the Pity) never comes. Rather, Moore prefers inciting the anti-gun-nuts nuts. This is certainly allowable, but the problem is its resemblance to the same journalistic conventions that Moore otherwise seems to abhor: chasing after Charlton Heston, spokesman for the NRA, is more celebrity-minded than truth-seeking. When Moore places an 8-by-10 photo of a slain six-year-old on a pillar at Heston’s home, he’s just groveling for applause. But after invading Heston’s home (and his senility), Moore seems more offensive than purposeful. Baiting Heston into incoherent, quasi-racist comments is cheap and doesn’t account for the complexity of American political life–or Heston’s own past as a civil-rights-movement crusader. It’s a kneejerk liberal response (though funny) to ridicule gun nuts rather than asking the hard questions about life in Littleton.

All or Nothing is all hard questions. But I most admire the plangent artistry of Leigh’s emphasis on what might be considered ephemeral: Love. By now we’re familiar with Leigh’s social consciousness; what’s amazing is how he maintains social awareness while exploring characters’ personal turmoil–which is usually the province of that unfairly dismissed genre, the melodrama. As the film’s title suggests, All or Nothing takes each of its major characters to a point of considering what love is–how it does/does not survive real-life compromise; how it subverts illogical fantasy; how it proves human trust; how it transcends surface ugliness.

When Maureen is out with the girls, a respite from her hangdog, partnerless life, she takes to the karaoke stage and sings "Don’t It Make My Brown Eyes Blue" with startling, emotive ability. She is, despite all her oppression and missed opportunities, a singer; illuminating Britain’s humdrum, pub-life custom. In American terms, this scene would be called a blues truth–art releasing people from their sorrows–but it happens matter-of-factly in All or Nothing; just one of the film’s many epiphanies. And though Leigh (perhaps intentionally) evokes the multileveled use of acting-in-life that stood out in the singing skits of Love, Honour & Obey and the country-western folklore of Among Giants, I can offer no greater compliment than to say Ruth Sheen’s karaoke moment does honor to the heartily sung social observation in Terence Davies’ masterworks Distant Voices, Still Lives and The Long Day Closes.

Crucial to the greatness of Leigh’s movies is his actors’ emotional authenticity; it’s documentary-like, life photographed as it happens. Most movies glamorize characters’ emotional extremes. Leigh and cinematographer Dick Pope achieve the kind of lucidity Bergman and Sven Nykvist pioneered, yet stay rigorously close to an unvarnished presentation of the working world, sunlight in a living room. This is an artistic and moral advance that casual moviegoers might take for granted, but it shames the effete estheticism in Todd Haynes’ upcoming Far from Heaven. Leigh’s movie subverts the standard turgid melodrama with a bracing but beautifully observed sense of life. Each member of his extraordinary cast hits revelatory peaks through simple, recognizable gestures. Spall and Manville enact Phil and Penny’s family crisis with an exactitude worthy of O’Neill’s Long Day’s Journey into Night (probably the first example of transcendent melodrama). Spall, a Leigh regular, gets to the depths of male longing, following his role in Patrice Chereau’s Intimacy that sketched a husband’s similar desire and disappointment. Love in All or Nothing isn’t extravagant, fantastic or simply sexual, it’s shown as basic to every aspect of human aspiration and social exchange.

We can intuit for ourselves (and the parent-child conflicts of All or Nothing confirm it) that modern tragedies like Columbine stem from greater issues than gun control. That’s why Moore’s rote response is so dissatisfying. He takes the Spike Lee approach (the dumpster method of social commentary) by throwing in every social problem he can think of and attempting to connect it to Columbine. Bowling for Columbine aims at enough targets for several documentaries. Some of Moore’s hit-and-runs smash into boldly original topics: Dick Clark’s freaky entrepreneurship, a Michigan welfare mother’s two-job stress, an interview with the brother of Oklahoma City bomber Terry Nichols, a confrontation with the producer of tv’s Cops, the facetiousness of the media industry’s constantly fomenting hysteria. All this is more interesting than the gun control issue, but Bowling for Columbine is way too glib for the noble purpose intended. If director-star Moore wants to move audiences to his position on gun control, he shouldn’t also think we are kids who need to be entertained, laughing at everything as at a school assembly.

In his zeal to make a feel-good-about-feeling-bad epic, Moore underrates essential human values. Perhaps the Kmart execs who politely receive Moore and two coerced Columbine victims feel some dissatisfaction in their work and home lives; Moore doesn’t ask. "The kids from Columbine scored an overwhelming victory against Kmart," he says when the store chain announces it will discontinue selling ammunition. But shouldn’t Moore say the triumph happened with Kmart? That’s how complicated America is. Moore’s so sure of his liberal audience that he doesn’t do them the honor of making a case, he simply presents attitude. That’s the difference between his grandstanding and Leigh’s great art.