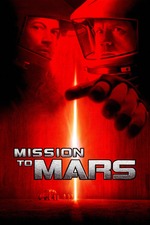 Brian De Palma's critical drubbing over Mission to Mars, reminiscent of the scene in Airplane! where passengers line up to smack an old lady, is the clearest evidence of the catastrophe that has befallen contemporary film criticism. Mission to Mars is a litmus test. It can be said with certainty that any reviewer who pans it does not understand movies, let alone like them. They'd be better off reviewing static, juvenile media like television or comic books.

Sadly, I realize there is consensus for this type of flippancy. Conversely, the consensus blindness regarding Mission to Mars indicates a cultural crisis. The new teen thriller Final Destination gets flip about death, as Mission to Mars does not. Director James Wong uses the new shock f/x of Super Real Catastrophe seen in the car accidents of Meet Joe Black and Erin Brockovich to jolt rather than insinuate fear or reveal squeamishness. The plot of a psychic teen Alex (Devon Sawa) trying to outwit fate becomes a series of Rube Goldberg death rallies, staged bluntly, not cleverly. When Alex's classmate (Ali Larter) recalls her father's death, it's a bland recitation without being strange or evocative like Phoebe Cates' in Gremlins. And though minor characters all have the names of movies figures associated with horror films, Lewton, Browning, Wiene, Schreck, Hitchcock, Chaney, Murnau, Dreyer, it's fake sophistication, disgracing a grave, poetic tradition.

Same thing happens when critics chide Mission to Mars for not being like Star Wars or 2001. Their fake erudition keeps them from appreciating De Palma's poetic treatise on life, death and rebirth. "Amused contempt," is the way Salon magazine praised the critical attack on Mission to Mars. It's a point of view that disdains emotionalism and beauty in cinema, aloof from art but reveling in smug superiority to any humane feeling that a filmmaker might express. Critics lining up to bitch-slap De Palma is the real bonfire of the vanities, a culmination of the pulp-trash culture that began by catering to adolescent cynicism, young adult hipsterism. Behind this is the dullest literal-mindedness. The issues-vs.-artistry complaint that Andrew Sarris outlined more than 30 years ago still threatens to keep movies a low medium, denying their esthetic (visual, kinetic, emotional) essence.

No current movie displays cinematic essence better than Mission to Mars, yet because De Palma has outgrown his old cynicism, critics blast it. (Slate's reviewer, longing for De Palma's earlier features, reduced De Palma's talent to target practice.) Critics ignore how De Palma's art grew into a more humanistic vision. Reviewing the 1981 Blow Out, Pauline Kael wrote, "I think De Palma has sprung to the place that Altman achieved with films such as McCabe & Mrs. Miller and Nashville and that Coppola reached with the two Godfather movies, that is, to the place where genre is transcended and what we're moved by is an artist's vision." Besides being one of the rare moments when Kael and Sarris complement each other's appreciation of film as art, that observation has held true for most of the movies De Palma has done since, including Mission to Mars.

It's a simple matter of appreciating what film is as an art form, and how De Palma exemplifies it even when practicing unexpected genres. Mission's three great sequences, the backyard barbecue, inside the space craft and outside on Mars' surface, sustain De Palma's longtime interest in the existential moment (what a non-film-critic friend calls "the terror of free will"). Looking at movies just the way Hollywood prescribes, critics only see the Luke and Woody characters as George Lucas and Disney company references; misinterpreting generic elements as repetition, not the postmodern comments they always are in De Palma. Today's critics have lost Sarris' and Kael's ability to perceive beauty and meaning in film, their literal-mindedness only appreciates "important" subject matter and spoon-fed morals. Even Salon's headline "Film Critics Hoot at Brian De Palma's $100 Million Space Epic" puts the emphasis on budget rather than style or content. Monetary value has become critics' major concern, Mission to Mars' budget, not its content. All this feeds into an attitude of "amused contempt"; such criticism plays into the designs of the film industry rather than esthetics. It misguides audiences into only accepting Hollywood formula, expecting every movie to be like every other; accepting conventionality, not risk-taking or personal expression. (And Mission is not De Palma's first sci-fi movie; that would be the equally astounding The Fury.)

Licking his wounds, De Palma should remember even the deified Kubrick's space trip was ridiculed. Here's Renata Adler on 2001 in the Times: "A film in which infinite care, intelligence, patience, imagination and Cinerama have been devoted to what looks like the apotheosis of the fantasy of a precocious early nineteen fifties city boy... An entire hour goes by before the plot even begins to declare itself... The whole sensibility is intellectual fifties' child: chess games, bodybuilding exercises, beds on the space craft that look like camp bunks...in their space uniforms the voyagers look like Jiminy Crickets... When the final slab, a combination Prime Mover slab and coffin lid, closes in it begins to resemble a fifties candy bar... [T]he movie is so completely absorbed in its own problems, its use of color and space, its fanatical devotion to science fiction detail, that it is somewhere between hypnotic and immensely boring... Kubrick seems as occupied with the best use of the outer edge of the screen as any painter, and he is particularly fond of simultaneous rotations, revolving, and straightforward motions, the visual equivalent of rubbing the stomach and patting the head... And yet the uncompromising slowness of the movie makes it hard to sit through without talking."

It's obviously film critics who think like a "fifties child." They persist in devaluing film art, praising it when juvenile, scoffing when it's serious and visionary.