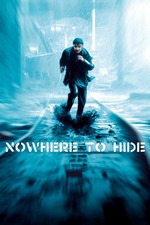 Brian De Palma's critical drubbing over Mission to Mars, reminiscent of the scene in Airplane! where passengers line up to smack an old lady, is the clearest evidence of the catastrophe that has befallen contemporary film criticism. Mission to Mars is a litmus test. It can be said with certainty that any reviewer who pans it does not understand movies, let alone like them. They'd be better off reviewing static, juvenile media like television or comic books. This is relevant to the splashiest entry in this year's New Directors/New Films series, Nowhere to Hide by Korean filmmaker Lee Myung-Se (it premieres at the Museum of Modern Art, March 27-28).

Sequences of visual flair and startling directorial assurance follow one another, turning the Korean underworld into highly stylized mock-realist locales, yet there's no connection between style and morality, art and politics. Detective Woo (a satirical salute to the ruthless estheticism of John Woo) relishes chasing and beating criminals but his crazed efficiency is just a ploy for Lee to wax tough. Woo's father advised, "You'll end up a gangster with all that strutting around, better become a cop." And Park plays Woo as a Takeshi parody, always with an open-mouthed grin/grimace. But we're way beyond the passionate psychosis of Robert Ryan's rogue cop in Nick Ray's On Dangerous Ground (who was memorably labeled "a gangster with a badge"). Lee pays homage to film noir without advancing understanding of its political and spiritual dynamics. Brutal cops are only funny or exciting if one hangs onto old genre cliches.

Nowhere to Hide's mindless estheticism fails to the degree it tries getting away with the cop/crime genre that we now understand to be allied with social hegemony, celebrating police/state power. Lee isn't much concerned with that; he's too distracted and fascinated by Western influence (not just Tarantino but the obscenity of Larry King Live broadcast on Korean tv). His first bravura sequence is scored to the Bee Gees' "Holiday," evoking the prime 60s moment when pop exploded globally, more poignant than today, when the postmodern mix of genres and media is conformed to without reflection. That explains the delectation Lee takes in police misconduct ("Nobody knows we're here. It's not in the newspapers, we came in real quiet"); he fancies a cliche, oversimplified cops-and-robbers world that ignores politics. It also explains how, disengaged from the Diallo-Louima realities we face, he can go so deliriously far into high style, insisting on apolitical, amoral enjoyment.

Lee makes mindlessness tempting. He stages Woo's nighttime fight with a stocky crook named Fishhead in a decorous slum yard among burgundy and teal banners waving like flags attached to a red clothesline. Crowning touch: a new moon hanging screen right illuminates the skirmish. This fight, a ballet, then escalates into a shadowboxing etude. Even tight, interior spaces sprout visual jokes: a Marx Brothers crowd of cops scrambling for a surprise attack, or a kitchenette tussle amidst smoke and bubbles. I haven't seen such capricious visual elegance since Jean-Jacques Beineix showed up with the trendsetting Diva in 1981. But Beineix blended style into fantasy; Lee keeps bumping into realism, an affectation modern audiences enjoy, but it makes for a dishonest abstraction. Even when Lee pulls off a two-man foot chase, extending stress and propulsion as magisterially as the attack on the stagecoach in John Ford's Stagecoach, it winds up excitation for its own sake. Exhilarating but cheap.