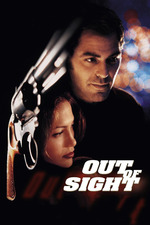 George Clooney has an Elvis Presley fit at the start of Out of Sight that Steven Soderbergh slows into a sculpted expression—head down, knee dipping, arms outstretched. Clooney’s character Jack Foley has just exited an insulting job interview and that tie-ripping pose—a dance of frustration, exertion and release—is the damnedest thing since Rosie Perez’ fly moves triggered Do the Right Thing. Foley’s style and anger say as much about his wily integrity as it does about Soderbergh’s: These men won’t be stopped.

Forget the trivial reasons reviewers have called Out of Sight entertaining, and pay attention to the unexpected tastefulness director Soderbergh brings to the worn-out genre of crime movies—this one the latest film adaptation of an Elmore Leonard novel. The picture is winning in spite of its jokey, insubstantial essence; what makes it possible to relax into the rhythm and idea of that opening scene is that Soderbergh has found the element missing from so many Tarantino-style hip pictures: an appreciation for a character’s responsiveness—Foley’s working man’s frustration, not mere quirkiness.

While this might seem indistinguishable from Jackie Brown, Get Shorty and The Usual Suspects, there’s a crucial difference: Soderbergh finds humane virtues in a genre that has lately denied them. Foley next gets convicted for robbing a bank and in prison meets a white-collar criminal (Albert Brooks) and two street criminals (Don Cheadle and Steve Zahn). He plans to double-cross them after breaking out, only that reunion gets complicated by an obsessed federal agent, Karen Sisco (Jennifer Lopez). And when these foes meet-cute—in the trunk of a getaway car—Soderbergh again slows the plot mechanisms, for romance.

Foley and Sisco equally initiate a cat-and-mouse pursuit; their ability to complicate the codes of their professions (he parries with his religious buddy Ving Rhames, she with her ex-cop father Dennis Farina) turns law and order into a sexy game of wrong-or-right, a test of their own ideals. These pros get inside each other’s heads, softening their relentlessness to a credible degree. Out of Sight doesn’t offer much beyond that, but whenever Soderbergh yields the plot for Foley and Sisco’s amorous ambivalence, it’s preferable to returning us to the way movies used to be (the aim of every Hollywood jerk-off). Soderbergh uses genre to search for passion and danger’s sources, giving this gossamer material a delightful, palpable basis—in both Foley’s Mobius-strip imagination and the recognizable world.

Discarding the smirkiness of heist movies usually set in interchangeable grade-B underworlds, Soderbergh has made the best film ever shot in Detroit since Anthony Mann’s T-Men. Reminiscent of the hard-luck atmosphere in last year’s Gridlock’d, Out of Sight is almost a documentary of Detroit in winter—the collapsed American city where Foley and the crooks meet, traversing both gray urban neighborhoods and dark, affluent suburbia. Authentic Detroit details include the mood-defining score of primarily Isley Brothers classics. Not a nostalgic hit parade, it’s as accurate and purposeful as the music in The Last Days of Disco. “It’s Your Thing” and “Fight the Power”—tunes of black urban struggle—evoke a timely subtheme. After Clooney’s Elvis twist, Soderbergh borrows the point of those records, and nuances of his location, to show people working at making the best of their wayward chances.

Given this real-world view, there’s no danger of Soderbergh turning into a Sydney Pollack clone like Steven Kloves or into a wan Tarantino (whose view of Los Angeles is so thoroughly preempted by cliché it has no chance at plausibility). He presents a truly lowdown world (not jazzy archetypes) through ambience and vibrant, first-rate characterizations. For the few who saw the idiosyncratic tension/rapport Soderbergh achieved in Schizopolis (with himself acting opposite others), Out of Sight’s emotional pas de deux won’t be surprising. The film is almost a series of humane duets, very smooth and captivating: between Clooney and Lopez; Cheadle and his various ex-con associates (including the always-camera-ready Isaiah Washington); Lopez and a woman (Viola Davis) who lost her dog; even Albert Brooks and Nancy Allen, who are so well-cast they telegraph the essence of their relationship without sharing a single scene together.

These believable personalities don’t come from a facetious walk on the wild side but a comic understanding of all kinds of hustling (from conventioneers in a hotel bar to Michael Keaton’s cameo as a gung-ho FBI agent). Clooney brings it fierce brown-eyed charm, Lopez sexual longing, Zahn comic confusion. Add the precise thoughtfulness of Cheadle’s Motor City gangsta—almost an extension of his performance in Bulworth—and it’s a freshly enhanced urban fable.

One particular bonus is the casting of Chameleon Street auteur Wendell B. Harris in the role of Lopez’s boss. Owner of cinema’s richest baritone since Orson Welles, Harris’ puzzling intelligence is one of the many things missing from contemporary cinema—achingly missed because we know it’s in the world, despite Hollywood’s rejection of it. Harris makes music and comedy of lines that otherwise might pass unnoticed. His skeptical air redefines generic conventions, an opportunity Soderbergh provides the entire cast. Made on the heels of Get Shorty’s popularity, this film is more honest; it’s definitive proof of what the non-varsity team can do when given a chance. Get Shorty was infuriating mostly because its celebrated, highly paid cast and crew had done no more than assembly-line noir. Not only are these performances finer, but the style of the film—Soderbergh’s delight in anecdote—lends it beauty. There is wit and intelligence in his mise-en-scène.

Take the remarkable love scene between Clooney and Lopez: As their emotions heighten, Soderbergh switches dialogue to voiceovers, as their infatuation becomes more intense and their sexual culmination inevitable. Soderbergh gets to it via flashforwards, such as Nicolas Roeg innovated in the Donald Sutherland-Julie Christie Don’t Look Now love scene. Against a snowy nighttime backdrop, Clooney and Lopez’s whimsicality recalls the Tim Robbins-Jennifer Jason Leigh duet in The Hudsucker Proxy done straight. The word for it is wonderful—not only sexy and romantic, but full of wonder.

Anne V. Coates’ editing is worthy of the woman who edited Lawrence of Arabia, but Soderbergh’s touch is apparent, too, in the coherence Coates helps him derive from past ventures. This film’s polish comes from almost a decade of searching out the values of storytelling and perception that Hollywood has virtually rejected in the same period—forcing Soderbergh into his own self-respecting artist’s twist-and-shout. Of the six diverse films he has made before Out of Sight, the only ones I cared for were Kafka and parts of Schizopolis, yet all of them were noble efforts, signs of intelligence. All this pop sophistication, intellectual poise and dramatic expertise confirmed Soderbergh’s hard-to-categorize authority. He stayed true to the ideals associated with independent filmmaking, even without attaining Big Willie flash and popularity. I used to think Soderbergh had missed his calling; that he would do best to simply revive the role of creative producer (as he did on Greg Mottola’s The Daytrippers). But now I see him as an individualistic moviemaker, and a genuine one; he’s the indie era’s Arthur Penn—if that’s not redundant.

Out of Sight seems to have grown out of his experiment that irritated me the most, The Underneath. Soderbergh borrows that playfully convoluted story structure, this time making it hum and inspiring cinematographer Elliot Davis to even more spectral, chromatically bold lighting. There is the sense of a world seen new—like what Vilmos Zsigmond achieved throughout the ’70s—because Soderbergh sees the genre anew.