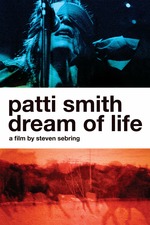 NOT A PRETTY GIRL.
Looking back at a rock-and-roller like Patti Smith is hard to do.

Too bad Steven Sebring’s long-gestating project, Patti Smith: A Dream of Life, doesn’t include Smith’s Rock and Roll Hall of Fame induction where she performed “Rock and Roll Nigger” (her 1978 tribute to the Beat era’s White Negro sentiments) before the fancy-dressed rock aristocracy gathered at the Waldorf Astoria. They were all mortified—either forgetting the racism inherent in rock mythology and Bohemian fantasy or else forgetting Smith’s commitment to rebellion—as in the lines “Jimi Hendrix was a nigger/ Jesus Christ and Grandma, too.”

When Sebring shows her recent concert exclamation, “We’re all fucking niggers!” all the white folks bouncing on stage make it an embarrassing revelry, not a protest. You want to hand her a recent newspaper or an issue of Fader. Smith has always risked a virtuous lunacy, still carrying the Bohemian torch.

I’ve liked Patti Smith ever since Detroit’s legendary Creem magazine published her definition of rock and roll in the poem “We Don’t Look Back!” So it’s weird to see a looking-back film like Dream of Life, even though it is distinguished by documenting her constant effort to keep moving forward. (She quotes T.S. Eliot: “It’s up to us to embrace history and blow it apart.”) Smith describes her collaboration with Sebring as “10 years in the making.” Its most sensitive moments observe Smith with her two sons, Jackson and Jesse, part of her reflecting on loved ones—especially those who have died, including her husband Fred “Sonic” Smith and art pardner, Robert Mapplethorpe. Sebring uses impressionistic images to match Smith’s poetry and music (horses, landscapes, faces, stylized edits like someone peeling off a Polaroid photo followed by a ray of light coming through a car window). Even the shifts from B&W to color have an artful abundance.

As long as Dream of Life stays an etude it is a lovely, emotional artifact. It documents an original androgyny punk, once a lanky-haired skinny girl wearing a man’s jacket and tie, Smith’s now weathered and matured. She’s so unpretty (a petty thing for an artist to be) that she’s nearly heroic; with that prominent nose and pigtails suggesting a Native American profile. And her young kook’s voice retains adolescent rhythms, narrating the film with cadenced pauses and emphases—a genuine performer’s gift. Smith’s uncanny musical talent is to shift from chant to rant to incantation. But Sebring also presents recent concerts and rallies where Smith’s zeal (an open heart and shallow politics) disturbs even a fan’s reverie. After reciting the Declaration of Independence, she declaims an indictment of George Bush for “using the rhetoric of freedom”—kinda odd for a pop poet. Sebring’s cut to the Dalai Lama is worse; an example of cockeyed naiveté. What regime is being protested anyway? Over all, Sebring records Smith’s gentleness as daughter, mother and friend; images that nicely complement the no-limits poet-adventurer.