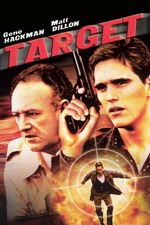 It's astounding to see Arthur Penn's name attached to this piece of cheese. The story concerns a Texas teenager (Matt Dillon) who learns to love and respect his father, an ex-CIA agent (Gene Hackman), as they work together to rescue mom (Gayle Hunnicutt), kidnapped by evil forces unknown while on a European vacation. Not surprisingly, it's difficult to find any trace of the thematic interests of the director of Bonnie and Clyde and Alice's Restaurant in this double-barreled hymn to patriarchy and patriotism; more disturbingly, it's impossible to find any sign of Penn's superbly textured style, with his abrupt breaks from comedy to tragedy, his superb sense of group dynamics, his fugitive lyricism. There is one quintessential Penn moment when the boy first learns of his father's old affiliations: for a few seconds, a deep, authentic sense of betrayal and resentment fills the screen. But the balance of the movie is devoted to the deliberate effacement of that moment; it's as if Penn were actively trying to suppress his identity. With Josef Sommer, Herbert Berghof, and Guy Boyd.

Not Dave is using Letterboxd to share film reviews and lists with friends. Join here.