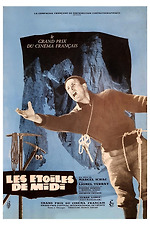 Is it our place to pass judgment on a work whose beauty - and quite a beauty it is - seems to be more sporting than cinematic in nature, which seems to fill us with admiration more for the model than for the art with which it is reproduced? My answer is yes, and for two reasons. The first is that cinema, as Andre Bazin demonstrated, invites us to revise formerly antithetical notions of art and nature. As for the light that a film like this can shed on the paradoxical merits of the documentary genre, one should read volume I of What Is Cinema? For what could I say that has not already been said in this work? Concerning the new "adventure film," one could also reread what Jean-Luc Godard wrote last year on Haroun Tazieff's Volcano (Les Rendez-vous du diable).

Now for the second reason. We shall no longer consider the ontology - or the definition - of cinema but, rather, its language or its history. It is unfair to treat Marcel Ichac's film separately, under the pretext that we like it better. It does intimidate us, and we feel a certain reluctance to talk about transitions and lenses when actors and technicians have risked their bones for many a week to provide our evening's pleasure. And yet, speaking for Cahiers, I believe that praise is more flattering when it is attributed to the talent of the filmmaker rather than to the genius of the genre or the sport. No special allowances need be made for this film, which is ambitious from an artistic point of view, for it means precisely to present itself as a film, even an exemplary film. A short prelude gives an idea of what should not be done, before showing us what it is proper to show over the next hour and a quarter. And we are convinced: Yes, it is pointless to weigh down, with false, novelistic embellishments, material already sufficiently rich in poetry and pathos.

I purposely said false. One could also say inadequate. If I claim that Les Etoiles de midi (The Midday Stars) is worthy of being compared with the fictional films showing these days in Paris, it is not because I believe that documentaries are superior. Quite the contrary: I think, as did Bazin, that fiction has always been, and will be, cinema's preferred route and that the most beautiful documentaries, such as Flaherty's, are able to allow some - if not anecdotes - at least drama. If this film can stand up to comparison with others, it is not because it shows that they are pointless, but because it equals them or beats them on their own turf. It is because this film, which doesn't bother with intrigue, gives us the same type of pleasure as a well-told story does. It is because the fight against nature, fatigue, and doubt that is portrayed is no less dramatic than are the vicissitudes of a story of passionate love, the itinerary of a repentant criminal, or a prisoner's preparations to escape.

Just as we praise A Man Escaped (Un Condamné á mort s'est échappé) and Pickpocket, or even Paisan (Paisa) and Viaggio in Italia (Strangers) for having mixed fiction and documentary, we should be glad to see a specialist, though he remains largely a craftsman, allow fiction to enter his genre through the front door and no longer through the service entrance.

Though traveling in the opposite direction, Ichac encounters Bresson and Rossellini on his path. I admit that he imitates them, but this is not to his discredit. On the contrary, what better teachers are there? So what if the episode with the German reminds us of Rossellini and if many details of the climb, and even a certain tone in the commentary and dialogue, make us think of Bresson? What does that prove, if not that we are dealing with a filmmaker who is up-to-date in a genre that is usually a bit archaic? We cannot say that Marcel Ichac "makes good films without knowing it," as Godard could write about Tazieff (and yet, what filmmakers, even the greatest, even Eisenstein, have not sometimes happily played a Monsieur Jourdain?).* In short, this work's greatest asset is that finally in the history of the documentary since Flaherty a film is absolutely and consciously modern, free of the verbal or plastic mediocrities apt to ruin the most beautiful material in the world.

This film is modern because it was able to throw out many of the clichés associated with the genre since its beginning and to open our eyes to the facts. Because fictional film is slowly getting closer in style to documentaries, why shouldn't documentaries end their lofty isolation and profit from the windfall? Acting is becoming less theatrical; many nonprofessionals are used; and these people, wherever they come from, carry themselves a thousand times more naturally in front of the camera than they were able to do before. Lionel Terray's, René Demainson's, or Michel Baucher's diction will not seem "quite right," I imagine, to fans of Pierre Fresnay or Kirk Douglas, although it is, of course, less shocking than the diction of Franqois Leterrier or Martin Lassalle. But we Bressonians would say that Etoiles de midi is one of the best-acted films showing today, not only for the movements, which cannot be criticized, but also for the speech. As for the text of the dialogue itself, I cannot think of another dialogue writer on either continent who could have written a better one, even for the chalet scenes which are a bit didactic (but isn't didacticism the weakness of athletes at rest?). It is not the first time that a documentary accords such importance to dialogue, but until now we had never really been convinced that the old principle whereby one must recreate truth by means of artifice was false, even though filmmakers increasingly prefer to create truth with truth.

I know that what I am saying is not new. Who is not convinced of cinema's realist calling? It even is appropriate to define this realism as absolute, but not in the relative way that different schools who claim the title define it. What distances us now from certain postwar Italian works is not their alleged realism but their extreme theatricality. It is not enough to want to be a realist to become one. Art does not reproduce reality, it discovers it, a bit like the scholar discovers his material. In both cases, these searches take us on roads far off the beaten path. That is why realism is not the enemy of style but, rather, is its best companion. Just as we are taught by the history of cinema - which these days evokes the fascinating memoirs by Henri Fescourt** whose title I took the liberty of borrowing - it is the love of the real that little by little led film people to create their own style, far from theatrical pomposity, and to carry this style to the degree of economy - entirely relative, we will say in ten or twenty years - where it is today. The best way to characterize the evolution of the past ten years is by the progressive abandonment of a notion that was quite suitable and successful in its time: that of the photogenic, in the sense that Louis Delluc, the inventor of the term, gave it. The advent of color, the wide screen, the zoom lens, and high-speed emulsions all prove that the filmmaker has not finished destroying nature and that the silt of yesterday will become the diamond of tomorrow. The number of themes that have lain barren until today is greater than we like to believe. Take, for example, sports, a "moving" thing if there ever was one, and one to which our eyes are sensitive. Boxing is photogenic, but athletic competitions are not at all, at least not yet. A one-hundred-meter race, a jump, so exciting in the stadium, lose all their power on the screen - and what should we say about an eight-hundred-meter race or a throw glimpsed on a news bulletin! Leni Riefensthal's film revealed a type of beauty in physical exercise that is certainly genuine but that is not quite what the specialist likes to revel in.

I believe that cinema's mission is no longer to enshrine realism but finally to discover it as it appears to the naked eye. It is incorrect to think that certain themes have been overdone: They have simply been misused. Some say that it is no longer appropriate for our art, refined by the years, to find pleasure in the spectacle of pure movement and physical force or even of great natural rhythms: Its path is in the conquest of the interior. Of course, but can't we find a more refined idea in these old external appearances than the one we believed to be connected to them? What is important to me, and what attracted me in Les Etoiles de midi, is not, as Rossellini said, "the image, but the idea." This film, in which space and movement are kings and that instinctively recaptures certain secrets lost since the silent period (the audience, as breathless as it is, is surprised to laugh at some of Harold Lloyd's or Buster Keaton's blunders), introduces the modern notions of continuity and duration. In this battle between man and gravity, the obstacle that seems the most difficult to overcome is not space but time, that is, the long and tedious repetition of each movement, the bearer of a more subtle vertigo than that caused by heights. Little by little, through the intervention of time, we perceive the futility, the vanity, and at the same time the true glory of the undertaking, the rare pleasure it brings. Thanks to time, we enter these men's souls, and the suspense, which is physical in the beginning, becomes psychological and moral in the end. In devoting itself to painting a rare passion, this film allows us to touch the common foundation of all passions. Far from being an interruption in our frequent visits to the movie theater, it reinforces our attachment by discovering new powers in it, making us more demanding but also more confident.

Not Eric is using Letterboxd to share film reviews and lists with friends. Join here.