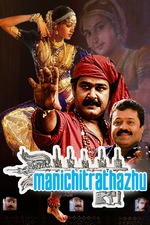 My first exposure to Manichitrathazhu was through the Tamil remake I watched as a child, Chandramukhi, a vehicle carefully tailored to highlight Rajinikanth's charisma. It terrified me as a child despite being incredibly over-the-top at times. I was unaware of Manichitrathazu's existence until I started getting more interested in film and the history of Indian cinema in general.

Manichitrathazhu is one of the most critically acclaimed horror movies from India. It relies almost entirely on subtlety for its undercurrent of horror. There's a scene where Sridevi gets on a swing and sways to and away from her family and you feel an unease just by the lighting and by the confusion on her face. The tilt of Ganga's eyebrows is just so skillfully horrifying. Shobana's acting is rightfully acclaimed because it is just a subtle performance of lingering intensity.

A lot of the subtleties will be missed on a non-Malayalam background. Malayalam and Tamil are quite similar sounding, so it was disconcerting when Ganga started speaking angrily in Tamil, a language similar enough to Malayalam as to be roughly understood . Another interesting decision was to have Ganga dance in Bharatnayam, a dance style more synonymous to Tamil people while still remaining recognisable to Malayalis, a disconcertion, the mix of familiar/unfamiliar, the feeling of reality slowly rolling away from you.

I found the concept quite interesting. From the beginning, I felt there was a strong undercurrent of unease in the relationship between Nakul and Ganga. There's a scene where Sunny and Nakul lie in bed together which speaks of an intimacy unseen between Nakul and Ganga. Ganga calls Nakul to bed and he refuses, citing work. Ganga sings that she'll be waiting at the door for a friend while staring wistfully at Mahadevan's house, which occurs before the "possession", suggesting the possession is more an amplification of Ganga's subconscious desires rather than a supernatural force. When Sunny pushes Ganga and Nakul together at the end, they seem uncomfortable, an unease that seems to be broached not by physicality but by the knowledge of their love for each other.

When I watched The Exorcist, I was struck by how easily that movie could be read as a creed against female sexuality. Here, I feel that Manichitrathazhu acts as a way of visualising patriarchy's fear of a sexually liberated woman. Possessed Ganga wants to kill her husband and get a lover, her husband is read as a captor. It is very interesting that Ganga wants to kill her husband on Durgashtami, a festival day dedicated to Durga, the embodiment of femininity and feminine anger, the conquering goddess. Kali is a form of Durga that brings rage/anger/death who dances on her husband. There is that underlying fear that the divine feminine is association with subjugation of the masculine, the monstrous feminine. When Ganga dances her "death dance" near the end, in reality, her makeup is smeared and her movements kinetic, an exaggerated femininity that has become monstrous, a subversion of the patriarchy that must be controlled. The three men watching through peepholes is a deliberate choice, their horror at seeing Ganga free, her rage and libido breaking out of the traditional housewife mould, is striking. Sunny confirms that Ganga is possessed by trying to gaslight her about the anklets. Her evilness is confirmed by the fact she is certain the anklets are her (which is a truth), and that she denies Sunny's attempt at gaslighting her. Madampally serves as a heterotopia, an “other place” which mirrors society in its fear of the feminine becoming monstrous and wanting to overthrow the shackles.

It is interesting when Ganga and Sridevi are introduced, they are in very similar saris, suggesting a mirroring of each other which occurs through the movie thourgh. Sridevi is bereft of a husband and seems forever alone, and Ganga who is dissatisfied with her husband. Ganga learns of her husband's love for her through his sacrifice and leaves happily. Sridevi accepts Sunny's marriage proposal too late and runs to the balcony only to see him driving away while the haunting tune that Ganga sung, about waiting at the threshold for her lover, ends the film. While Ganga has come to terms with masculinity, Sridevi has remained ostracised.

Certainly there are problems in the script. Mohanlal's performance as the eccentric psychiatrist would be quite polarising and I feel that at times it did go over the top (personally while I preferred Mohanlal's character in terms of the film I feel like Rajinikanth could have played it better). While the climax is memorable, the film does take some time to get going, and I feel like here my past watch of Chandramukhi meaning I was aware of story beats like the “psychic vibrations” which took away from the suspense. The priest subplot I feel was handled rather clumsily. Also while most of the supernatural elements are explained, the smashing of the jar/clock seem to be supernatural in origin, an amalgation of the supernatural/reality that wasn't really hinted at elsewhere and seems out of place when looking back, despite being scary at the time. Similarily, the question of why Ganga tried to murder Nakul (with the poison, and then a possible strangling) before Durgashtami is never really answered, seeming like plot contrivances to turn up the horror while ignoring the thesis.

However, overall Manichitrathazhu is still an incredibly directed film, which gradually ratchets to an incredibly climax, with beautiful cinematography and incredibly haunting music & lyrics and a wonderful performance from Shobana. It definitely holds up and despite knowing what would happen, the climax on the film was absolutely enthralling.