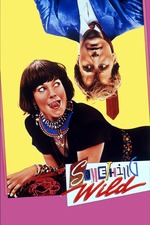 Jonathan Demme's romantic screwball comedy isn't just about a carefree kook (Melanie Griffith) and a pompous man from Wall Street (Jeff Daniels). The script—a first by E. Max Frye—is like the working out of a young man's fantasy of the pleasures and punishments of shucking off middle-class behavior patterns. The movie is about getting high on anarchic, larcenous behavior and then being confronted with ruthless, sadistic criminality. This rough-edged comedy turns into a scary slapstick thriller. Demme weaves the stylization of rock videos into the fabric of the movie. Starting with David Byrne and Celia Cruz singing Byrne's "Loco De Amor" during the opening credits, and ending with a reprise of Chip Taylor's "Wild Thing" by the reggae singer Sister Carol East, who appears on half of the screen while the final credits roll on the other half, there are almost 50 songs (or parts of songs), several of them performed onscreen by The Feelies. The score—it was put together by John Cale and Laurie Anderson—has a life of its own that gives the movie a buzzing vitality. This is a party movie with both a dark and a light side. With Ray Liotta as the dangerous, menacing Ray; Dana Preu as the kook's gloriously bland mother; and Margaret Colin as bitchy Irene. Also with Jack Gilpin, Su Tissue, and Demme's co-producer Kenneth Utt, and, tucked among the many performers, John Waters and John Sayles. Cinematography by Tak Fujimoto. Orion.