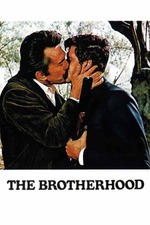 “Mother of God, is this the end of Rico?” Little Caesar (Edward G. Robinson) asked, surprised, as the bullets hit him. The classic movie gangsters of the early thirties—Rico, and Paul Muni in SCARFACE, and James Cagney in PUBLIC ENEMY—were killed by the police or they were fingered by betrayers and set up to be murdered by rival gangs, killing each other off, as it were. Just as there is a family tree of monsters in horror films, gangster films reveal a family pattern. Kirk Douglas’ Frank in THE BROTHERHOOD is in the direct line of descent; his gangster father was betrayed, and murdered by Luciano. In this sequel, the next generation stays in the same line of work, as thoroughly committed as vampires. Though Cagney may have played it Irish, it is understood that the ancestral home of gangsters is Sicily, as the ancestral home of monsters is Transylvania. Some characters persist through generations of horror movies, and in THE BROTHERHOOD Eduardo Ciannelli, who played so many gangsters in the thirties, including one modelled on Luciano himself, is now an old, involuntarily retired Mafioso. Horror films used to reprise climactic sequences to clue us in on the previous material (and for reasons of economy); we have seen enough gangland massacres to fill in Frank’s background, and we provide our own reprise. We know what Frank is meant to be. His forebears were ambitious and wanted quick money and power and respect; he has got what they died for. He is the gangster as a success, entrenched in his union, his shady businesses, his protection rackets. The story goes like this: Frank’s ties are to the old Mafia he grew up in, and he’s uneasy about the new, modern business plans of the “syndicate” of which he is part, but his younger brother, Vince (Alex Cord), whom, of course, he has brought up, is college-educated and goes along with the new investment ideas, as does Vince’s father-in-law, Bertolo (Luther Adler). When Frank discovers that it was Bertolo who betrayed his father to Luciano, he murders Bertolo, and the syndicate orders Vince to eliminate his brother. This is all implicit from the outset; we know that this Brotherhood must end in brother killing brother.

It doesn’t work, dramatically. Westerns have often taken the theme of the last of the old-fashioned badmen and made us feel regret as he is defeated by the forces of progress, but they have cheated on his badness. He is a romanticized outlaw, not a man who plays dirty. However, Lewis John Carlino, who wrote THE BROTHERHOOD (as an original screenplay), has made Frank an old-fashioned murdering racketeer—the kind who orders his henchmen to execute an informer and stuff a canary in his mouth—so he is colorful but hardly lovable. We saw those early gangsters do terrible things, too, but they were cocky upstarts, bucking the established criminal world, and we were involved by their audacity; Frank is a settled, middle-aged racketeer, a brutal, corrupt version of a middle-class businessman.

That plot that seems “classic” because it has seen service in so many screen classics can function only if we regret the old way of life that is passing; if we can’t—and it’s pretty hard to get nostalgic about the Mafia—we are numbed by a tired old story that just gets in the way of what is interesting and new in the movie. Robert Warshow, in his famous analysis of the gangster hero, said that it wasn’t relevant “to point out that most Americans have never seen a gangster,” and that “what matters is that the experience of the gangster as an experience of art is universal to Americans.” I think it is relevant that most Americans have never seen gangsters, because although we don’t see them we know they’re there, and those early movies showed us how these people we didn’t see operated. The Western’s heroes were legendary, mythic, but the gangster movies were set in the present. In action films we got to see logging and mining and whaling and railroad building and drilling for oil, and in the gangster films we got to see how illegitimate business worked. And because crime is hidden from us, and far more difficult to see than ordinary industrial processes, the fictionalized accounts in the movies had the excitement of revelation. We saw how gangsters terrified small shopkeepers into paying protection, how they transported liquor during Prohibition, how they ran night clubs and prostitution, how they bribed police and worked with politicians, how they fought each other for control of territories and spread their spheres of influence. Naïvely dramatized though the early gangster movies were, they had—what the Westerns lacked—the excitement of urban contemporaneity; they showed us the dark side of democratic ambition, and the nightmare city with the network of crime like a sewer system that didn’t drain. Warshow may possibly have exaggerated our psychological involvement with the imaginary gangster—“the tragic hero”—and underestimated (or not been concerned with) our curiosity and anxiety about criminal life.

THE BROTHERHOOD underestimates our curiosity, too—it gives us too many conventional movie situations and too little of the new business of crime. It’s interesting to see that gangsters at home live by traditional values when this is contrasted with what they do outside the home; when there isn’t any contrast, it’s merely banal. We cared about Rico or Tony or Tom not because he loved his mother or sister but because we saw what he did to become a big shot; we saw what defined him as a gangster and what a life of crime meant. THE BROTHERHOOD is conscientious in its portraits of the old-timers playing boccie and of Frank the family man, but although little bells ring in our heads at each “insight” and tiny lights flash for the “nice details,” each scene seems to be an obligatory scene that we have to get through. And when we finally get away from the “human” side of a gangster’s life and see Frank at his union office, what does he do? He phones his brother. This gangster movie starves to death for lack of contemporaneity in the business of gangsterism. Movies are neglecting what they took over from the novel—our interest in the life about us—and they’re not giving us the material in which the plots were grounded. The new investment plans that Frank recoils from are contemporary documentation that could be more exciting than the movies about international spy systems and evil geniuses—documentation that makes America seem more of a paranoid vision than Transylvania ever did. The syndicate proposes buying into electronics firms that are crucial for national defense, and, of course, since it will control the unions, it can eliminate competition. This makes contact with the world we live in as surely as Scarface throwing his “pineapples” did; it is, in fact, the same ruthlessness carried from the local to the national level. Were those who made the movie afraid of boring us with more data, or did they recoil, too? Is that why they tell us so little and show us even less? My guess is that Carlino intended to make the plot work on the plane of irony—that his point was that we might well feel nostalgic about an assassin like Frank when we got a whiff of his successors. But any hope of irony is destroyed by a sentimental, juicy, big-star performance by Kirk Douglas (who produced the picture), and by Martin Ritt, who directed, cloddishly, for a tragic last-of-the-gangsters effect. Their conventional approach obscures the wicked joke that might have split the surface and forced us to laugh as the spectre of the new racketeers manipulating the nation made the old Mafia of terror and revenge seem rather endearing.

The murder of Bertolo is poorly staged, and there’s a jarring break in the continuity after the murder, so we never find out how the syndicate discovered that Frank did it. Lalo Schifrin’s music is thrown over so many holes and bad spots that it becomes a form of surgical dressing. Even within the rather simple terms of Rift’s approach, the casting of Alex Cord as Vince is a mistake. Douglas and Cord are not brotherly enough to produce any sense of tragedy; Frank’s emotions about Vince just seem misplaced. And Cord is too rigid to be interesting as a new kind of junior-executive crook. In order to sustain the plot at even the simplest level, Vince needs to be amiable and ingratiating, but Cord is tight and cold. Not only does Ritt lack the style for irony but he keeps Frank in loving closeup so much that we seem to take up residence in the crater of Kirk Douglas’ chin. Playing a Lee J. Cobb sort of role, Douglas has begun to act like him and to look like him. This is something we can easily live with, but Douglas may not find it so easy. Frank shouldn’t apologize to Vince about putting on weight. That’s star talk—it lets the star think he’s fooling people into believing he got heavy for the role. As Frank, Douglas does the obvious well. He’s a good, strong actor, but he’s not an interesting actor. He has reached the point where he must be the star because he isn’t subtle enough to be anything else. It’s fun to see him swelling his chest and grinning happily under a floppy mustache, but actors who strut the stage so supremely confident of their virility make the best cuckolds. Douglas has become so broad and hearty an actor that every time Luther Adler wobbles his jowls or Irene Papas (Frank’s wife) does something small, he is obliterated. Mother of God, a star, like a gangster, doesn’t know what direction he’s getting it from. By the time Vince shoots Frank, Kirk Douglas has already been laid out.