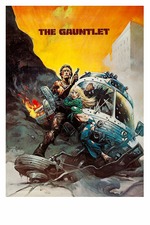 In the thirties, Monogram and Republic made Westerns that had lackluster casts and no believability and no connection with art. There was just one thing to keep the predominantly male audience interested: the viewers could follow a moving object—a man on a horse in the great outdoors. THE GAUNTLET, directed by Clint Eastwood, is about a Phoenix cop, Ben Shockley (Eastwood), who is ordered to go to Las Vegas to bring back Gus Mally (Sondra Locke), a witness for a trial. He's a worthless souse; she's a hooker. The trip back, which is their redemption, is also a series of chases. They're pursued by the police and "the mob," so they're always in movement—on almost everything but a horse. They use a police car, a motorcycle, a train, a bus. The merest whisper of a plot (orders have been given to kill Gus to keep her from testifying) serves as a pretext for shoot-'em-ups with thousands of rounds of ammunition going into whatever buildings or vehicles the cop and the hooker are in or on. At times, the whole world seems to be firing at them; buildings and cars are turned to lace. And they keep moving. You look at the screen even though there's nothing to occupy your mind—the way you sometimes sit in front of the TV, numbly, because you can't rouse yourself for the effort it takes to go to bed. Afterward, leaving the theatre, a fair number of people were saying, "That's the worst movie I've ever seen"—in rather aggrieved, surprised tones, as if they were just coming out of a stupor.

Eastwood's face is more relaxed in this picture than in his last. THE ENFORCER, one of the DIRTY HARRY series; he probably enjoyed the part and thinks he's acting because he's playing somebody dumb—the slow-witted Ben has to be told the score by the smart hooker. At first, Sondra Locke plays Gus as a hysterical loudmouth subliterate, yowling four-letter words at Ben. Then, almost as if someone had written her dialogue as part of a heads-bodies-legs folded-page drawing game, Gus informs him that she's a Finch College graduate, and proceeds to lecture him in the cool tones of an intellectual sharpie, a leftist doctor of sociology. (Her slipping in and out of her education isn't explained.) Eastwood also gets beaten up and mutilated enough to satisfy his king-size masochistic fantasies. His companion—now purified by love of him and her new refined diction—suffers multiple rape in order to save his life. Can a script come up with anything more floridly primitive than that?