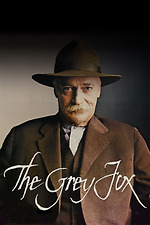 The story of a legendary gentleman bandit, Bill Miner (Richard Farnsworth), who served 33 years in San Quentin for robbing stagecoaches and then, when he got out, took up robbing trains. There may never have been photographs of trains more exultant than the shots here of the old Northern Pacific steaming through mountain forests. This first feature, directed by the Canadian Phillip Borsos at 27, after a number of highly regarded documentaries, has spectacular work by the British cinematographer Frank Tidy; the images are dense and ceremonious, and the picture has the most lovingly photographed rain since MCCABE AND MRS. MILLER. Farnsworth is a superb camera subject, with a lulling sexual presence, and he and Jackie Burroughs, who plays a red-haired suffragette, do some highly photogenic flirting. The movie is like the book Wisconsin Death Trip with a romantic bandit at its center. Robbery here is the only honorable profession for a man with Bill Miner's courtliness and sense of style. Borsos appears to have a dandy's approach to crime and social injustice, but he's an inspired image-maker, and the film manages to be an art Western without making you hate it. Based on a script by John Hunter that stays fairly close to the historical accounts and leaves a lot of gaps-we never find out how Miner, who'd been in prison most of his life, became a civilized, sensitive man and a lover who admired a flamboyant, free-thinking woman. With Wayne Robson as the little boozer Shorty.
see State of the Art.

Greystoke: The Legend of Tarzan, Lord of the…