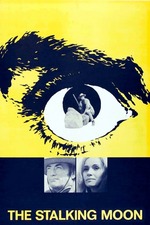 THE STALKING MOON is a brutal horror story in a Western setting. Eva Marie Saint is rescued after ten years with the Apaches; under the protection of Gregory Peck, she escapes across country to his ranch with her half-Apache son while the boy’s father—a supersadistic killer—pursues them, butchering everyone in his path. It is not difficult to keep an audience in a state of terror when a helpless white woman is running from an evil, painted savage swathed in rough fur—King Kong without Kong’s nice side. There are basically two kinds of movie chases: when you’re in the position of the pursuer trying to get somewhere before something you don’t want to happen happens, and when you’re in the position of the pursued. When you’re being hunted, as in this movie, the chase can become a nightmarish experience of tension and anxiety. This nightmare is punctuated with massacres in bloody closeup, and at the end, when Peck, wounded and bleeding, has destroyed the monster, there is no one left alive but the woman and the child and, of course, Peck. For many years, big-budget Westerns have generally tried to be respectful and sympathetic toward the Indians, and now, when THE STALKING MOON goes back to the most primitive movie image of the vicious savage, damned if it doesn’t get acclaimed in Life for “the simplicity and fascination of a myth dredged up from the unconscious of the race.” The movie-makers didn’t really have to dredge very deep. And, in case we’re not mythologically oriented, they’ve taken care to provide a little resonance. As Peck and the monster lie locked together, grappling in final conflict, the monster dies on top of Peck, and there is a lingering shot of his brown hand on Peck’s shoulder. A study guide to THE STALKING MOON has already been prepared. (Robert Mulligan, the director, and Peck also worked together on TO KILL A MOCINGBIRD, which is used as an example of movie art in courses in high schools and colleges.) One can see a new generation of teachers treating that blasted brown paw as the movie equivalent of Maule’s curse.

Eva Marie Saint is competent and shows some strength, though one waits in vain for her character to develop, and Robert Forster, as a half-breed Army scout who sets an example for the young boy to emulate, has the kind of gallant, amusing role that helps actors become stars. But the picture centers on Peck, the model American. He’s a dull ideal, yet his dullness works in his favor; it makes him seem more sound. The role of the decent superman requires an actor like Peck—an actor of proved authority—and Peck is very good in it. Why wouldn’t he be? He has played it before. Actually, he has always played it (even when it wasn’t called for), but I mean specifically in CAPE FEAR—a movie built on the same mechanism of a family being stalked by pure evil, and with many of the same details, even to the monster’s killing the family dog. Why be afraid to pull out old stops? This is commerce, baby. If you want to show that a killer is evil, you don’t take chances with just a half-dozen massacres; some people don’t care about people, so he’d better kill a dog. And why leave it there? Press on. Have the old man who loves the dog become so distraught that he wanders out and gets killed, too. Wring it dry. THE STALKING MOON doesn’t have a sense of shame—only a sense of what “grabs” you. CAPE FEAR was so effective at scaring the hell out of the audience that it was generally attacked and disparaged back in 1962 as a pointless exercise in terror. How is it that just a few years later the same kind of movie can be rated “G” (for General Audiences) and recommended as a “rewarding experience”? In CAPE FEAR, the stalking monster was a character in the movie (Robert Mitchum as areptilian, sadistic sex maniac). Horrible and exciting as the movie was, it was limited in its frame of reference; both men were white, and the setting was modern and urban, so the movie was merely a gruesome shocker, obviously designed to give you thrills. But in THE STALKING MOON we never get a clear look at the monster (except for his dead hand), so the audience can project onto him much more easily, and the movie is set in the eighteen-eighties and has so many authentic-looking details that people can experience the tensions of a sadistic horror story while feeling that they’re appreciating the realism of this picture of the Old West. The crude log cabins may be just another example of the amazing things they’re doing with plastics these days, and the old stagecoach may be just décor for the horror story, but people who want to elevate what they’re responding to can clutch at those details and at the bits of human interest—which are décor, too. And, because the conflict is not between characters, they can see the film as “the struggle between the good guys and the bad,” as the study guide suggests, and they can go all the way into irrationality with the study guide, which informs schoolchildren that “the duel” between Peck and the mad monster “represents symbolically the clash between the white settlers and the Apaches of the Southwest.”

There has always been a basic ambivalence in the Westerns that dealt with Indian vs. white. Even when the Indians were represented as betrayed and goaded beyond endurance—and they often have been represented that way—the audience, in the crunch of the final battle, rooted for the white settlers huddled against their wagons while the flaming arrows of “the savages” flew toward them. The hero and heroine would survive, the Indians would be wiped out or driven off. This ambivalence is the plague of the Western: ultimately, the whites are the good guys and the Indians the bad guys. If we were appalled during the Second World War by all those movies that turned the issues of the war into a simple contest between us (good, decent, human) and them (evil, cruel, treacherous, fanatic, psychopathic, inhuman), and if we refuse to go to see something like THE GREEN BERETS because the standard movie reduction of the issues to good and evil and the dehumanization of the enemy are repulsive to us, then maybe we should ask: What’s going on in THE STALKING MOON, with that Apache in his bestial garb? Because if he’s a symbol, I don’t think it’s for the Apaches of the Southwest. I think he’s a stand-in.

To return to what Life says about the movie: “It is an examination in archetype of good and evil locked in a death grapple. It has the simplicity and fascination of a myth dredged up from the unconscious of the race. It is, in this simplicity, what movies are all about.” People may think this is what movies are all about because this conflict between good guys and bad guys is what moved them as children and they may have the desire to be gripped the same way when they go to movies as adults. They feel it’s the real thing—“pure movie”—when it’s a basic morality play. If the monster were not an Apache in a bearskin but a Jew dressed in money, that could tap “the unconscious,” too. And if the monster were a naked black man carrying a spear, the movie could score a knockout at the “unconscious” level. The Apache has been stripped of all humanity in order to make him function as pure bad guy, and then we are told that the child must make a choice between the cultures of his mother and his father, as if between his good and evil heritages. The child’s soul is being battled for, and his final winning over to his mother’s culture becomes the moral aim of the picture. The implication is that if his Indian side wins, his future will be murderous and the country will be in turmoil, but if his white side wins, all will go well for the country. (The adult half-breed who has taken the right road sacrifices his life for the whites.) What is this crazy movie about? In a movie in which an artist is in control, we can try to examine what he’s doing, but in this kind of factory picture, with its conflicting intentions and its compromises and its sanctimonious think pieces about the future of America, we can’t tell what’s going on, because it doesn’t represent anybody’s point of view. Yet in dropping the usual sympathies and explanations, in treating the Apache as evil incarnate, it’s very much of this time and of the tendency now to think that we’re cutting through to the truth—if not of what happened, of how people feel. Oversimplification seems to be in style. It’s easy to make fun of the equivocation in the more flexible and more historical approaches of recent Westerns, but I wonder if we should be so eager to sweep away the modern movie tradition of showing that issues of good and evil are not clear-cut, that dehumanizing the enemy is often a way of justifying our own inhumanity.

The plot of THE STALKING MOON doesn’t grow organically from the material and it never takes up the subject right at hand—what the white woman has experienced in her ten years of captivity. It’s just a plot rigged to scare us and keep us scared. And it does—even though we can see perfectly clearly that if the woman at her moment of liberation, when she says she must leave the area immediately, were asked “Why?” and explained, she could be given a military escort and the movie would be over. At every step, the plot proceeds fraudulently just to prolong the movie: Forster shouts when he should shoot, the Apache abducts the woman to no particular purpose, Peck waits too long to fire, and so on. The movie isn’t directed well enough to conceal the improbabilities, and Mulligan doesn’t have the aptitude for violence of an Arthur Penn or a Sam Peckinpah—directors who can give violence meaning. But this kind of movie can be “effective” even when it’s poorly done, because it hits below the belt. And to be violently teased simply isn’t enough reason to go to a movie. It is not enough for the aim of a movie to be to “grab” you and hold your attention. If that is its only aim, it offends even as it succeeds, because you resent the manipulation. I resent the assumption that we are so bored and corrupt that we will be pleased whenever we are not bored. Since I am not bored outside the theatre, why should I go in to see a movie whose only purpose is to keep me from being bored? I don’t think the basic morality play is what movies are all about. On the contrary, I think it is what movies in the past have too often been about. Maybe we shouldn’t be so eager to dredge up myths—Pop versions of old wives’ tales—from what so many people now call the unconscious when they probably just mean pulps and comics and old movies. Because, of course, these myths are formed of fear and prejudice. Old movies are full of them because the easiest, fastest way for commercial entertainment to appeal to a mass audience is to touch soft spots. I have been very harsh on this movie, and perhaps, like THE STALKING MOON, this is overkill, but movies, along with the other arts, can open us to complexities, and I don’t think we should applaud this kind of infantile, primitive regression.