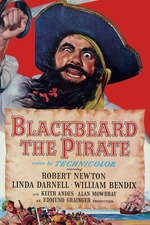 Simply THE iconic pirate movie, this is the one that sets the stage for true down & dirty pirating rather than matinee idols making grand speeches.

The Good:
I've been watching a lot of the more famous Golden Age pirate films and it's funny, they kind of go in historical order. In "Captain Blood", Errol Flynn is a surgeon who ends up forced into piracy. Then in "The Seahawk", Flynn stars again as pirates are legalized by the British as "privateers". In "The Black Swan", Captain Morgan gives up piracy to become the governor of Jamaica and hunt down pirates who refuse to serve The Crown. Then here, we follow Blackbeard, the most notorious pirate in the end of the pirate era. Besides the film imagining Morgan as a contemporary (he died when Blackbeard was a kid), it's the first one of the bunch to get a great number of details right. It pays attention to the construction of the ships, and there's the first ship-to-ship battle that actually depends on a bit of sailing. The pirates aren't all white and don't all talk in British accents! Though there's still far too few black actors here to look accurate, at least they have quite a few minorities and reflect the variety of cultures and accents involved. They also hint at how democratic pirates were (though they still give Blackbeard a private cabin). And while they imagine a way for Blackbeard to cheat his reported death, they do include a lot of the real details, including the man (Maynard) responsible for it.

Maynard (played by Keith Andes) is a bit of a brick, but there are also some pretty great performances here. Robert Newton as Blackbeard is simply The End. He gleefully chews up the scenery, and makes every moment a joy to watch. But he shows canniness at times, and ferocity at others...it's a dense performance that would nearly typecast him from then on. Linda Darnell is also phenomenal as the Lady Edwina, and can I say THANK GOD for a pirate film that doesn't have a tropey, rapey love story. These are all "Girl hates the guy at first, guys keep threatening and manhandling the girl, girl is abruptly won over by their manliness and suddenly madly in love". Darnell here is reasonable to start, realistic and wily. She's a woman in a tough situation, and plays her cards accordingly. Yes, the romance moves swiftly, but at least it feels like it's consensual and she is genuinely gradually won over by the lead treating her as a relative equal (for the time). Plus, she's a stunning presence.

The Bad:
Compared to some earlier productions, this doesn't look nearly as good, the editing is choppy, and the continuity leaves a lot to be desired. The music is often at odds with the tone of scenes, and there are a couple bits of goofy-faced humor and the like. All in all though, this ages so much better than the other pirate films I've seen (and most modern ones) that I can easily forgive all the bad.

& The Extra-Textual:
This film is a treasure trove of fun facts. I looked up the director, who renamed himself "Raoul" Walsh to sound more exotic, and he's got a freakin' eye patch! How amazing is that? He lost his eye driving through the desert when a jackrabbit jumped through his windscreen! He was apparently quite a Golden Age legend, though I wasn't too impressed here. The lead, Andes, was the original voice of Hanna Barbara's "Birdman"! Darnell had a great career, but sadly it was cut short when she died in a fire at 41. Irene Ryan, Darnell's drunk maid, later played the Granny on Beverly Hillbillies! Torin Thatcher, who played Capt. Morgan, later played lots of villains including Sokurah the Magician from "The 7th Voyage of Sinbad" (which I watched repeatedly as a kid). And of course, Newton's performance set the standard for how all pirates should be played afterwards. Geoffrey Rush mainly referenced it for his performance as Barbossa in the PotC films, before they introduced Blackbeard himself later.

Truly a fun film, with a surprising amount of darkness and a real edge. There are lots of great lines here, and such an iconic death scene that I can't believe this hasn't been remade. It's ripe for it.