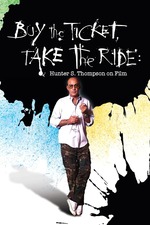 This doc works as a eulogy for Hunter S. Thompson, who had killed himself less than 3 years prior. If you don't know the name, or only just recognize it, this will probably be of great interest to you. They talk to a great many of his friends and loved ones across the full spectrum, from Colorado sheriff to NY lawyer to Hollywood actor. The big names come hot and fast, and there are soundbites aplenty.

You can watch the whole thing here on Youtube in pretty good quality: youtu.be/VlAZV_EsSSE

While the doc does briefly go over the origins of young tyke Thompson, it moves past his growing up and into his professional years pretty quickly. Time spent there is mostly focused on his breakthrough '70s and then the two films that were made of him, in '80 and '98. If you're already a fan, this will be well-trod ground, and mostly just masturbatory nostalgia of the kind that Hunter would turn his nose up at. Too bland, what's new? Where's the fun?

What we're missing in this is depth, insight, and flair. Essentially, everything Hunter was known for. The great hope is still out there somewhere, the definitive examination of an unexaminable freak, the true doc of Dr. Hunter. There's a fair bit of entertainment here just via all the access, all the fun stories from stars, all the photos and old video. But it doesn't all add up to much, and not in the way that Fear & Loathing was some grand misbegotten quest that went awry. No, this aims not as high and falls less short. But short it falls, in that it's a fun bit of fluff, but Hunter probably deserved more.

Or maybe he didn't. He probably would've gotten bored at anything approaching 90 minutes anyway. I just can't help feeling like he deserved what he called Gilliam's film, "A lonely clarion call sounding over a lost battlefield." This didn't have that poetry, but I guess it'll do in a pinch.