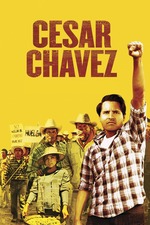 2-minute Review:
Ugh, don't believe lazy Letterboxd summaries that classify everything as a "biography" because it features a real person. This is NOT a biopic, it tells the story of the United Farm Workers strike from 1965-1970. It is mostly focused on how the leadership of Chavez, a 2nd generation American citizen, helped to unite Mexican, Filipino, and American farm workers into a labor rights movement. There are moments with his family, but the focus is firmly on the movement. Directed by Diego Luna (an actor perhaps best known as Cassian Andor from Rogue One), the film feels a bit scattered, like it wants to be a lot of things but doesn't have a clear purpose. It's credited to two writers, both of whom worked with (apparently stronger) other writers on a couple good films. It also has two credited editors, both of whom have mixed-bag filmographies. These issues tend to dominate the film, which Luna simply doesn't seem experienced enough to pull together into a movie worthy of Chavez' accomplishments.

History lesson almost done, promise. It's relevant to the film, but the script doesn't do a good job of establishing any of this context. So the Mexicans, now American immigrants, kept this up pretty much until the Great Depression, when white Americans were even turning on other white Americans. Farm jobs, or really any jobs, were so hard to come by that "Okies from Muskogee" were told to keep on moving through the State. (You've seen Grapes of Wrath, I hope.) But when America entered World War II, suddenly there weren't ENOUGH workers. The US government started the Bracero program to actually bus in workers from across the (new) Mexican border to work on the farms and in the railroads. They even kept it up after the war, and passed a series of laws during this time to supposedly guarantee exactly what Chavez is fighting for here: adequate shelter, food, sanitation, a minimum wage, and freedom to move around the towns and not be excluded from "white" areas.

The Bracero program (and all legal protections connected with it) was ended in '64, and farmers tried to start a student athlete "summer job" program to replace it for the '65 growing season. All the students quit within weeks due to the poor conditions and the "A-TEAM" program was never tried again. The growers instead went back to hiring immigrant labor, but this time without the protections of the Bracero program, which is where our Cesar Chavez comes in, leading the people to unionize. The film doesn't cover what Chavez was doing before this, any of his early life or upbringing, what the "CSO" was or how it got started. And I honestly watched this film hoping to learn a bit more about Chavez, since I didn't know much about him, so that aspect was disappointing.

I looked it up after, and the short version is that Chavez had a pretty typical Mexican-American upbringing, joined the Navy in the war, got back from the Pacific and worked a few different agricultural jobs. He met Fred Ross while working as a lumber handler. Ross is the guy who started the CSO, a civil rights organization focused on Latinos. Chavez ended up working with them for years, but we pick up on him in this film where he's quitting, fearing that the organization is getting too white collar and out-of-touch with the realities of the workers in the fields. So the broad strokes of Chavez moving his family a lot, working in the fields while organizing, fasting, travelling, strained family relationships...that's all true.

While this film does capture some central truths about Chavez, I don't think that really either Michael Pena or Diego Luna are up to the task. The film's story jumps around and is edited together choppily. The emotional beats that would really explore the relationship between Chavez and his wife (an excellent America Ferrera) are mostly not explored. There's a lot of time spent on the estranged father-son relationship, a well-worn story that doesn't serve the film. Chavez' partner in the movement, Dolores Huerta, is a legend in her own right but just given very little to do here. Rosario Dawson, goddess that she is, does her best to inject some life into what's mostly an exposition-delivering role, but she can only do so much.

Worst yet, I just haven't seen anything yet to convince me that Pena can anchor a film on his own. I love the guy, but he does not show the charisma and dynamism here that a leader like Chavez needs to show. I applaud his decision to keep the Hispanic accent barely noticeable (although he's not very consistent with it), as Chavez was an American and quite fluent. But he doesn't really look, sound, or act much like Chavez otherwise. (A video for comparison: youtu.be/SH1c0cgORA0) And you know, you don't have to do an impression of the real person you're playing, as long as your performance suits the story. But Pena just isn't emoting much here except when he's shouting. His female costars just act circles around him, and they have so little to work with.

Luna also fails the film in the lack of balance to the tone. You can blame the confused cutting of the film on the editors, or the weak story on the writer, or mediocre performances on an actor, or the shot composition and look on the cinematographer, but it's the DIRECTOR who has to balance the tone of the film. And I don't know what Luna wants to say here. The cinematography by Enrique Chediak is actually quite good at points, as he's shot some great films. But good shots don't make a compelling story, and this one feels rather...rote. It hits the big moments, including the NFWA's iconic "Si, se puede!" (Yes we can!) slogan. But we just don't really feel the power of these moments. And the film seems to wrap up with lightness and levity, like "Yay, he did it!".... but he didn't do it.

Literally the next year, Chavez was striking and fasting again. The Delano Grape strike was a victory, but needed reinforcement, and Chavez spent the next 30 years going 2 steps forward, 1 step back. He had a crazy life, getting into the '70s commune movement, going vegan, becoming an authoritarian ruler of a nationwide corporation... his story didn't stop here and wasn't a cheeky, happy ending joking with growers who killed his people. OH! John Malkovich. Malkovich, Malkovich, Malkovich. Yeah, this is one of his better, less bizarre performances. He's wonderfully villainous. Shout out as well to Jack Holmes for doing a great Bobby Kennedy.

Ultimately, if you're looking for a harmless film to watch for Labor Day (or Cinco de Mayo?) and get a little riled up, this could do the trick. But it doesn't come close to approaching the earlier films it drew inspiration from, like Salt of the Earth and Alambrista!... I'd watch those first, maybe then Norma Rae, then Harlan County, USA, then Modern Times...then Sorry to Bother You...then...