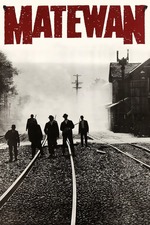 2-minute Review:
NOT black and white, but nevertheless starkly filmed, this is a leisurely-paced "fight the power!" film based on a true event. Set in the early 1920s in the mountains of West Virginia, the film loosely stitches together various tensions among the townspeople of Matewan, WV in the lead-up to a gunfight between pro-union coal miners and the Stone Mountain Coal Company's "hired gun thugs". Like the Pinkertons before them, the Baldwin–Felts Detective Agency was those days not doing much detecting...

The film chronicles from the start of the mine-workers' strike, to people of color being brought in as scabs, the B-F detectives ratcheting up tensions in the town, and ultimately a showdown. The problem is that while watching, it has none of the momentum described in that sentence. The film feels like a loose collection of events, depicting aspects of religious influence, racism, and classism. It's a social justice film that never rises above its indie roots to become anything more than a Harlan County, USA dramatization.

Matewan owes much to that 1976 classic documentary, including using one of its standout performers for an encore here. Literally, singer Hazel Dickens (who first appeared on film in Harlan) lends her iconic warbly vocals to help establish mood for the mountain people of West Virginia here. Director Sayles gives her musical performance scenes that are asides to the actual story. He also incorporates musical traditions from the African-American and Italian immigrants that come in to the mountains, trying to pay tribute to the "melting pot" of culture there. But like that melting pot analogy has been replaced by the "salad bowl" one, the disparate pieces never really integrate with the film. There's no organic reason to feature the music, especially in an overlong narrative. And none of the scenes do anything to further the story or character development. It's just window-dressing.

The other aspect of the film's presentation is the visuals, which were apparently noteworthy at the time (earning a cinematography Oscar nom). It's true that several of the scenes in and around the mine capture the grimy darkness, but this is done as well or better in nearly every film or TV show these days. It's unfortunately barely noteworthy except for film history significance. What far more affects the viewing experience is the presentation of the story, in Sayles bouncing from character to character in his typical insistence on an ensemble film. While that may sometimes work, I think it hampers this one. We naturally want to root for Chris Cooper here (in his first role!) as the even-keeled peacekeeper trying to treat all men equally and empower the Union. But Sayles refuses to give him enough screen time or bravura scenes to make him into a true lead. He seems inexplicably clueless as to what's happening for much of the film.

What ends up dominating the film is just the cartoonish villainy of Kevin Tighe and Gordon Clapp as the B-F "detectives". Clapp is especially hateable, his every line a caustic and arrogant example of entitlement. Tighe does his now-patented "smile that hides venom", making him more a villain you love to hate. But still, Sayles' script has them start off their villainy at a 9, bordering on a 10, so unless they actually kill someone (which they immediately threaten to do) there's just nowhere for them to go. Even many of the townspeople are so immediately caustic and unlikeable, we get no sense of betrayal or shock when they hamper the 'good guys' winning. Sayles just fails to give the film any narrative balance or build any sense of simmering tension. This is decidedly not meant to be an audience-engager like "Tombstone", but it could learn a lot from that film about how to ramp up tension and lead to a culmination of violence.

The film has a rather tropey beginning that doesn't differentiate itself from either Harlan County or Salt of the Earth, two superior films that came before. The middle gets much stronger however as it investigates the racial dynamics at play and how the rich mining company pits different working-class groups against each other. James Earl Jones is of course a standout here, and one of the best scenes is seeing the actual mechanics of the indentured servitude these POC got forced into by Stone Mountain Coal. The final third of the film has increasingly eye-rolling writing though, with an unbelievable sub-plot about cry-wolf rape accusations and character interactions that seem isolated from all the interactions they've had up to that point. Again, the film just doesn't develop its characters well or create a sense of building on anything.

For me, worst yet was finding out the actual truth of what happened in Matewan, which is significantly darker and less-Hollywood than the ending of the film. In real life, the survivors of the "Matewan Massacre" were much celebrated in WV, and became real heroes. They went around giving speeches and rallying support against the mining companies, particularly Sid Hatfield. He became a real activist, and was later tried for several actions he was accused of by various mining companies, including murder and destruction of property. But he was acquitted each time. While walking up the courthouse steps for one such trial (unarmed), he and his deputy were surrounded and attacked by 7 men from Baldwin-Felts. They were gunned down (followed by headshots) in retaliation for Matewan. In fact, the entire Union movement was stopped in WV until the '30s, and even now mining conditions are horrible and the mining towns are completely dependent on exploitation by big companies. Meanwhile, "black lung" is still totally a thing.

Despite some strong central performances and a bit of style, the film is too meandering to really make that much impact. It feels like it barely scrapes the surface of the real issues, and doesn't even hint at the actual months-long WAR that occurred after the events of Matewan set off revenge killings. While it caught many actors on their way up, in retrospect this film is overshadowed by both their later work, and by the pro-labor films that came before it. The '80s is not really known for strong dramas, and this is a prime example. Good for the time, but nothing people need to seek out these days.