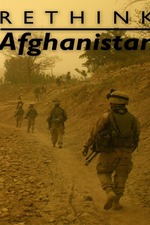 In honor of 11-11, Remembrance Day, or what used to be called "Armistice Day" in the US, now Veterans Day. I think that's very telling, as like in the end of When Harry Met Sally when they discuss the lyrics to Auld Lang Syne, "maybe it means we forgot what it is we're supposed to remember..."

This is the date to honor the signing of the Treaty of Versailles, the formal end to World War I. Honoring veterans of the war is part of that, but the point is supposed to be about what they're fighting FOR, about an end to war, an end to the need to fight. It's a time to rebuild, to rethink what has gone wrong and what can be done to avoid past mistakes. I can think of no better time to have seen the documentary Rethink Afghanistan.

This is a criminally underseen film from producer/director Robert Greenwald that can be streamed for free on his company's Youtube channel here: youtu.be/_7DgntKIyXA All his films are just about getting the word out and are not for profit, so they're made with a limited budget and released for as many eyeballs as can find them. This is probably the best one of his that I've seen, avoiding nearly all of the overly-bombastic Fox "News" type graphics and shock music that some of his other films use for breaking through the dummy barrier. This is essentially like a very good 1-hour news special you might see on 60 Minutes or something, back when they had guts and integrity.

As with most of Greenwald's films, the most impressive aspect here is the access. He talks to a phenomenal array of insiders, from Afghan generals to Pakistani rebels to former-CIA department heads and embedded war correspondents. The idea is (and it's both striking and sad that everyone was saying this 12 years ago) how much the US should NOT be in Afghanistan and how much damage our approach was doing on every conceivable front. The film is divided into several main chapters:
The Troops
Pakistan
The Cost of War
Liberation of Women
Civilian Casualties
Security (aka "the War on Terror")
Solutions
By this point, it should come as no surprise to find the people in the know and the people on the ground telling a completely different story than the Bush Jr. and Obama administrations. We were not making much progress in a single one of those areas, and in fact were often making things MUCH worse. The solution is to pull out troops, and invest that taxpayer money not only in infrastructure solutions, where we support NGOs that give the Afghans jobs, but in fixing all the problems in our OWN country.

So the question is, "why wasn't that being done?" Why was so much money being wasted so inefficiently to get the net effect of producing 2 generations of people that hate America for blowing up all their friends and family and leaving them destitute and maimed? It didn't help average Americans. It didn't help the Afghans. So who did it help? Is it just a case of gross incompetence? I don't think so. The couple of US soldiers in Afghanistan interviewed here know the score, as do many interviewed in the doc "Restrepo". I think this is where Greenwald's later doc, "Iraq For Sale: The War Profiteers" makes a good companion piece. I've already reviewed that one here: boxd.it/1UUc5L

Essentially, these American companies make a killing (literally) off using taxpayer dollars to export "freedom" at the end of a gun barrel. Some of the biggest bastards in the world like Erik Prince and Dick Cheney leverage their political and business contacts into lucrative deals for companies like KBR, Blackwater, and Haliburton to go into other countries like a bull in a China shop and dish out "aid" like a drunk man trying to pour up a martini. Our aid gets splashed everywhere, we're lucky if anyone actually gets served anything they wanted, and the only one getting anything out of the experience is the drunk behind the bar. Watch Erik Prince cackling with glee is he moves to countries with no US extradition treaty and hides his blood money in the Caymans.

This film doesn't quite tap into that, but there's your answer. The little girls who are shivering and starving in the background here die because US politicians sold it to Americans that their tax money would bring freedom and make them safer. Instead, it made spoiled rich brats richer and killed a lot of innocent people. When we think of Remembrance Day, let's remember the ramifications of putting soldiers into someone else's country. Let's remember that being born into a Western country and having more opinions than sense means we have to be extra careful before playing world police. If not, the current state in Afghanistan is what happens. And this doc is a great reminder of that, and of what to do better for the future.