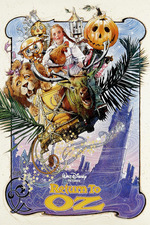 Return to Oz is meant to be a sequel to the first book, "The Wonderful Wizard of Oz", rather than the film. Hence, a few discrepancies in the portrayal that may have thrown off fans of the old film, like Dorothy here looking about HALF the age she was in the old film (despite them saying those events were six months ago). This film is also a bit of a departure in that it seems a bit more squarely aimed at kids, rather than a kind of fun, all-ages musical. In fact, there are NO songs in this (another factor that might have turned off or confused fans) and gone is much of that cheerful optimism which pervaded the old film. While the 1939 classic did have a few darker moments (the better to contrast with the rest!), this film has an overarching sense of dread and some genuinely scary scenes. They're actually quite different films, and while this one is fairly loyal to the books, I think that's what prevented it from finding an audience on its initial release. The question is if it's worth the cult classic status it has since gained?

For the Real Cinephiles:

I don't know how I missed this on initial release, but I don't even remember being aware of it. I might have avoided it if I'd known, because I was at an age where a musical with a little-girl lead was not something "cool", and that's probably the impression I would've gotten. My older sisters used to sing through the entirety of The Wizard of Oz when it played on TV every fall, and even though I love the film now, I had gotten quite tired of it at that point.

But this movie is so much better thought of in the context of what was happening in Film in the early '80s, because let me tell you: there was something STRANGE in the water, my friends! Perhaps it was the US and Russia reaching the apex of nuclear war tensions. Perhaps it was the teens who came of age during Watergate now being old enough to put their more-cynical point of view into the film industry. Perhaps it was the effects of the New Hollywood movement trickling down into kids' entertainment unintentionally. Whatever the case, there was a wave of Fantasy films aimed at kids that had many surprisingly-dark, mature, and genuinely scary bit in them. One of these trauma-inducers came out nearly every year in the '80s, with a high-profile run starting at The Dark Crystal ('82), and continuing with Something Wicked This Way Comes ('83), Gremlins ('84), The Neverending Story ('84), and Labyrinth ('86). The missing year was '85: and that's where Return to Oz fits in.

Sure, we had The Black Cauldron ('85), but that was animated. Dark animated films are a whole other category we could talk about, and there are plenty of worthy contenders for most traumatizing childhood memory there, too. Is it The Fox and The Hound? The Secret of NIMH? How about Transformers: The Movie? As hard as those were to deal with, the actual live-action scenes were scarier and more scarring for most. Whether it be terrifying characters like the Skeksis and the Gmork, or horrifying scenes like body-melting and super-rapid aging, or just the prospect of a bunch of happily neurotic fur-puppets chasing you to try to tear off your head, these movies seemed designed to fill you up with nightmare fuel that would keep you going long into your teenage years. And the scenes in Return to Oz are no exception.

The overarching story of Return to Oz is mostly pulled from original author Frank L. Baum's third book (what's that you say? Didn't know he wrote a whole series? Welcome to the club!) "Ozma of Oz". This book brings Dorothy back after his second book "The Marvelous Land of Oz" had focused on a young boy. Some of that boy's adventures and sidekicks are adapted here, but mostly it's the story of Dorothy trying to get the rightful princess of Oz, (Ozma), back on the throne. The main antagonist is The Nome King, who's wonderfully visualized here. The film incorporates a variety of practical special effects, but The Nome King and many of his nomes are done through a blend of claymation, and it's very creepy and cool.

In fact, "creepy and cool" is a good general descriptor for the whole film, one that fits right alongside the fantastical worlds of The Neverending Story and Labyrinth as a journey with a real sense of danger and trepidation hanging over it. Like many great Horror movies, you constantly want to shout at Dorothy "No, turn back! Be careful! Don't be so trusting!" Fairuza Balk makes her screen debut here as the wide-eyed Dorothy, and she plays her a bit differently but no-less compelling. There's still much of that inherent trust and belief in the goodness of others, but she catches on quickly enough that she's not frustratingly naive. You do wish she succeeded in her journey more through her own merits than from dumb luck and misadventure, but to some extent that's just Baum's books.

So there's clearly a lot going for this movie, which begs the question why it failed? Well, partly could be due to not being appropriately marketed to its true target audience, as I mentioned above. There's also the crowded market it was in. It was released the same week as Cocoon, and more importantly, Goonies had been released just two weeks before. The week after, Mad Max: Beyond Thunderdome was released, and Back to the Future was the week after that. This time period was just flooded with wild, creative movies that would appeal to kids and pre-teens, and I think Return to Oz seemed old and silly and boring by comparison.

There's also simply the problem of adapting Baum's books. Baum himself often felt ambivalent about the Oz novels. He tried to branch out into other work, but like many fantasy authors with a huge hit early on, nothing he later tried had the same level of appeal to readers. He repeatedly wrote 'just one more' Oz story, often moving off Dorothy to explore other protagonists, but inevitably coming back. While some of those Oz novels found popularity, there was real magic in the simplistic formula of the first one that was hard to recapture. A good witch and a bad. The head, the heart, and the body. Science and magic. Naivete' and cynicism. Baum's later efforts to bring in comparable characters often felt slightly off, creative but not as resonant.

Jack Pumpkinhead (shout out to Nightmare Before Christmas) was introduced in Baum's 2nd novel, and he teams up with the Scarecrow and the Tin (Wood)man. But he's honestly more of a creepy character than the Scarecrow, and seeing him visualized here is a bit off-putting, not to mention the horror of a disembodied hunter's trophy brought to life with various furniture bodies. In Baum's 3rd book, he brings in his breakout character, Tik-Tok the Mechanical Man. He's probably the standout character in this film, too, as a replacement for the Tin Man. But on the other hand, Billina the Hen is simply no replacement for Toto the dog. And that's part of the problem: it's too easy to draw analogues and view these characters as stand-ins for others, often to their detriment.

Disney had tried to make a musical Oz sequel back in the '50s with members of the Mickey Mouse Club. Thankfully, they abandoned "Rainbow Road to Oz" and put them in Babes In Toyland instead. But they were right to be skeptical about the ability to sell Oz sequels to an audience. In the '50s, The Wizard of Oz still had a strong following clamoring to see it on TV every year. You'd think that would've subsided by 1985, but the bar was set high by that classic, and the only way to go was to try to make a film which was definitely NOT that. Director Walter Murch really wanted to do a darker, more serious version of Oz, and to portray the hard conditions of Kansas life. For this he drew heavily on the book (and photos!) of Wisconsin Death Trip! Apparently, the filming for the Kansas portion ended up with actually brutal conditions, with one cameraman quitting and Balk sometimes crying on set due to the cold. He also used an overall darker color palette and used a score by David Shire that was markedly less jaunty than you might expect.

It was Murch's first film as a director, where he'd been an award-winning editor and sound mixer for George Lucas and Francis Ford Coppola. For his first film, he worked with lots of special effects, kids, and animals: a sure recipe for a disastrous shoot. Sure enough, the inexperienced director started falling behind schedule, and halfway through the film, the producers at Disney had lost confidence in his vision and fired him. Only because Lucas stepped in and went to bat for his friend was Murch allowed to complete the film (with Lucas agreeing to take over and reshoot if Disney hated the final product). The end result is a movie that gives us villains like The Wheelers, amazing special effects sequences like the Nome King's transformation, and straight-up nightmare fuel like Dorothy being chased down a hallway of screaming, disembodied heads!

It's a visionary film that should be placed right alongside those other '80s classics of Dark Fantasy, and one I'm glad to have caught up with.