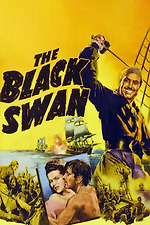 The REAL synopsis of this movie: focus on that bottom center picture on the poster. That's the actual film-

"Amidst a backdrop of pirate intrigue, our serial rapist protagonist stalks a woman he likes the look of, knocks her unconscious, routinely harasses her, assaults her, and finally kidnaps her, but it all ends well because Stockholm Syndrome leads to her eventually giving it up. Roll credits."

The Good:
There's a lot of production value in this film for being the middle of WWII, and it does look pretty great for the era. In fact, it won the Oscar for Cinematography, I suspect for the island sunset shots. I was also particularly won over by the performance of the main antagonist, Captain Leech. Played by George Sanders, he really knows how to deliver the lines so they seem not only cutting, but also a natural part of his character. I was so interested, I looked Sanders up and found out his brother was another famous actor with a different name, Tom Conway. Sanders was married to Zsa Zsa Gabor for 5 years (his second wife), then later married her older sister Magda for a year (his fourth wife)! He killed himself the year after their divorce, leaving a note that said "Dear World, I am leaving because I am bored. I feel I have lived long enough. I am leaving you with your worries in this sweet cesspool. Good luck." He was 65.

The Bad:
This is essentially meant to be an adventure flick, and it picks up right where Errol Flynn's "Captain Blood" left off, with the former pirate becoming the sitting governor of Jamaica as an English colony. Of course, both films are based on the real history of Captain Morgan (yup, the rum guy), but this movie supposes he really did reform and was only framed as continuing to protect and make deals with pirates. The historical departures don't stop there. The ship functions are wrong, the maps are wrong, the language is wrong, the accents are wildly inconsistent (Power makes no effort at all to disguise his), and the action is liberally over-cranked, leading to some comically sped up sword fights in the finale. Director Henry King didn't impress me in the slightest, and in fact his chief direction seemed to be "Faster!" as every edit and every performance seems in a rush. It makes for a brisque but unengaging film. Edward Ashley is a particular lowlight, barely delivering a caricature of a performance (as the fop) while tripping over several of his lines as he struggles with the dialogue.

& The Ugly:
This story goes beyond problematic into "What the hell were they thinking?!" territory. Seriously, you thought Gone With the Wind was bad? The various Jamaican and Caribbean servants and locals here, rather than reflecting any real culture, are either some unholy melange of "savage" stereotypes or are just forced to regurgitate Song of the South-type plantation behavior... in Jamaica... in 1679. Oh, what about the rape scene in Gone With the Wind? Well apparently that piece of romance went over so well that a couple years later they decided to make a whole movie out of it (this one). Yes, not only is our perfect dick of a "hero" constantly trying to feel up Maureen O'Hara, he's doing it while vacillating such nuggets as "In Tortuga when a woman slaps a man's face, it means she wants him to grab her, overpower her, and smother her with kisses." Oh, and "I always sample a bottle of wine before I buy it. Let's have a sip, see if you're worth taking along."- <then proceeds to try to pull at her dress before abducting her>. I kept waiting to figure out why the overbearing musical score and framing where signalling this guy was supposed to be heroic...by the time I got halfway through the film, the only answer I could find was "He's good at the physical stuff." Old-school Hollywood thought anyone with matinee looks could be adored for being a perfect monster.

Women were holding up the US in '42, working in factories and raising families. The production they contributed saved us from having to master German grammar <shudder>. And yet they were being served up narratives like this and expected to just toss it off as a bit of fun. Hard pass.