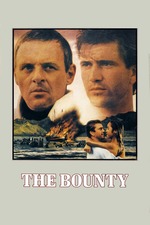 So, Hawkeye the Mohican, Rob Roy, and William Wallace get on a boat commanded by Odin, the All-Father...

The Good:
Well, besides the fantastic cast in this thing (which also has a wonderful amount of actual Pacific Islanders, even if they don't get many lines), it's a very pretty film. I mean, besides the beautiful scenery (in more ways than one), the cinematography captures the conditions of the sea and sky at their faithful best and worst. Seems like this was sold more as a heartthrob romance (featuring Gibson) than previous versions of the story, but where the film actually succeeds better is in portraying the reasons for mutiny with more nuance. I was also a fan of the Vangelis score here, which was used to great effect and more subtle than in other films like Blade Runner or Chariots of Fire.

The Bad:
So about that scenery...we're very much rooted in this with the British sailors, so everything is from their perspective. That means not only much stiff upper lip, but also a lot of male gaze. There's also not a lot of insight into the various tribes and what they thought. Not that any of it is terribly inaccurate, just that if you're hoping for a different perspective, I don't think watching pre-2000s movies is for you. While the film has a reputation for being the most accurate and balanced portrayal yet of the historical events, it's still a bit uneven and could feel slow for some. It was apparently originally conceived as two movies, but the studio had to consolidate it into one due to a ballooning budget. That means they skip over 5 months of time on Tahiti that would've really helped to understand the characters' decisions better. They also skip over many months of Christian and Bligh's island-hopping journeys after the mutiny. Basically, this is a very very streamlined version that spends its time creating mood and building suspense rather than narrating the full story.

& The Extra-Textual:
Gibson was apparently a drunken wreck during much of shooting, and his resulting performance is ...fine. Despite the flack he's gotten, it's perfectly good, you just wonder if he could've done something more interesting if his heart was in it more. He's gone on record as saying the script didn't go far enough in making Christian a bad guy, but history doesn't seem to bear out that opinion. Bligh continued to have many more complaints from various officers in his long years of service after this, including two more mutinies. He was by all accounts a total prick, if a competent officer. Rather than Christian leading the mutiny out of love, it seems more likely that it was class disputes (Bligh was lowborn vs Christian born a gentleman), respect for local culture, and hatred for Bligh that led the crew to revolt. Bligh was essentially enforcing a system of white supremacy and looking down on both the natives and his lowborn sailors. The sailors, on the other hand, had a lot of hardship awaiting their lives... or a tropical paradise with people who knew how to enjoy life. A modern film could've dove into these viewpoints more rather than this somewhat simpler portrayal.

For the curious, in reality Christian seems to have been killed with many of the other sailors less than 5 years after the end of the film. Polynesians believed in free love, and if white men tried to prevent the Tahitians from sleeping with their "wives"...well, lack of sexual access on a small island is enough to make someone murder. A lot of someones. Still, 5 years on a tropical island paradise is probably better than the lives they would've had as English sailors...