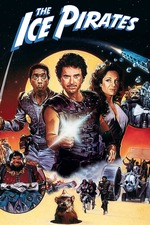 Happy International Talk Like a Pirate Day, maties! And I c'n think 'o no better filum to be celebratin' the day then this fine piece o' B-rate cinema herrre.

You know within moments of the film starting that it's going to be the kind of self-aware genre film that has fun playing with the tropes. Rather than the typical swashbuckling, we're suddenly in a heist movie where the pirates use a Laser Drill (TM) to cut into the hull of a ship. Like good robbers, they first cut a hole and peak through, the tension in their men (mostly combat robots) building the whole time. The coast is clear, so they begin cutting through, but one of their robots is losing his nerve, and his buddy has to smack him back into focus. It's the kind of gleeful nonsense that this film is full of, and like Han Solo or Ash Williams, everyone leans into the camp just enough to give it style without going too far into cheese.

For such a low budget film though, the world-building is surprisingly good. We get a taste of how the politics, economy, aliens, leisure time, royalty, weaponry, and space travel all work, all within a brisk 90 minutes. Developed during the height of the Star Wars craze, The Ice Pirates manages to be more than just another in a slew of SW knockoffs, throwing in medieval knights, robots, outlaws, even some martial arts, and a good dose of adult humor. From a very '80s black pimp robot to jokes about space herpes and a hysterical finale in a time warp that involves rapid hair growth and unplanned pregnancies, this film falls somewhere between Space Balls and Star Wars, a real sweet spot.

Director Stewart Raffill definitely has more horrible films than good ones, but his good ones are really enjoyable cheese like Mannequin 2 and Tammy & the T-rex! You have to think that the producers somehow reigned him in and finagled this awesome cast though. They managed to get horror legend John Carradine as the nemesis! A young Anjelica Huston, whose family is Hollywood royalty. Ron Perlman in only his 2nd role, who's having so much fun he apparently decided to just make B-movies the rest of his life (I kid). Former linebacker John Matuszak is genuinely really funny here (you probably know him as Sloth from The Goonies)! Then there are cast members who are doing the best work here they ever did, like Mary Crosby and Michael D. Roberts in the Princess Leia and Lando Calrissian roles, respectively. Urich himself makes a great low-rent Han Solo, and there's even a cheeky cameo by Max Von Sydow in the Road Warrior homage sequence.

All in all, The Ice Pirates is great fun, wickedly clever, and surprisingly well-done. There are continual surprises throughout the film, and honestly the only thing I'd change is a reference to Tylenol, which sticks out as dated. Otherwise: timeless classic. Yeah, I said it!