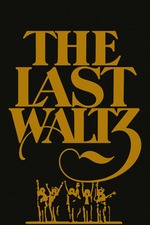 "You're still there, huh? We're going to do one more song, and that's it.... Happy Thanksgiving!"

The first performance of this concert doc is the encore, recorded on November 25, 1976. That's because the final song in the regular set features an ensemble of special guests that's hard to beat, and rightly has to be reserved for the ending of the film.

The litany of guest stars is a good thing, too, because I had no idea who "The Band" was.

They existed at a peculiar crossroads between a variety of musical styles including Southern Rock, Blues, Folk-Rock, Country, and many more which (Wikipedia tells me) has come to be labeled "Americana". Think something like a cross between CCR, Lynyrd Skynyrd, Hank Williams Sr., and the E-Street Band...all of whom are better. Sorry, but I just watched a concert of their 'greatest hits', and I knew exactly one song: "The Weight", which I misremembered as "Take a Load Off, Sally". The sad thing about The Band is that they're just a band. They had nothing like the cultural impact that all their peers had, the ones who come to light up the stage as guest performers here.

This then ends up feeling like an early version of that "your favorite band's favorite band" sort of doc. Only I can't say that Scorsese does anything to convince me why these guys earn that title. They started as "The Hawks", then "The Honkies", which no one took to so they tried "The Crackers", apparently aware of the cultural appropriation aspect of their music. However, people found the name off-putting and they wanted to put out records, so they switched to the non-descript "The Band" and chugged away throughout the '60s counterculture and into '70s Prog Rock, touring, partying, making friends, and ...becoming pretty utterly forgettable.

Look, it's not that they don't have talent. Each member seems to play multiple instruments, they all trade off on vocals, and apparently each contributed to songwriting. But watching this fairly by-the-numbers recording of their last concert, there's just very little passion or performance up on the stage. They're simply boring to watch. When they light up is in interacting with some of the legendary A-side acts that come out, like headliner Bob Dylan or legend Muddy Waters. I'd always been an appreciator, but seeing those guys in the '70s really showed how magnetic they were. Some of that bleeds off onto The Band, but in their solo songs, they're merely competent. It's like the background noise you hear in a poolhall that reminds you of a song you really like...so you go put a quarter in the jukebox and put that one in.

There was apparently a lot of behind-the-scenes drama in the making of this, but none of it is captured within the film. Scorsese's interviews with The Band are sycophantic, a real fan lobbing softballs and not digging in. Guitarist Robbie Robertson is a producer on the film, and you see Scorsese push back a little bit by showing Robertson asking for redirected questions or to rephrase, but that's the extent of it. This doesn't show any of the underbelly of the band or give any insight to their changing membership or long history witnessing the British Invasion, the end of the Counter-Culture era, or the birth of Prog Rock. This is utterly and completely disposable unless you're a big fan of many of these artists.

The highlight of the film for me is the song with Eric Clapton. While Robbie Robertson occasionally digs in on some of the solos of songs, you never see him work so hard to impress as trading licks back and forth with Clapton on "Further On Up the Road". You can see them both smiling and having fun facing off...though Clapton whips through the material effortlessly and Robertson looks like he's punching above his weight. It must have been fun for Clapton, as years earlier Hendrix had turned up to a show of his and immediately blown him out of the water without breaking a sweat. What a difference some years make.

Ultimately though, your mileage on this film will vary greatly depending on how much you love the music. For Scorsese and film critics of the late '70s/early '80s, this stuff was resonant in a way beyond what's on the screen. These middle-aged white guys who thought they were a little hipper than they were watched a band full of the same, and never thought to look around the audience and see that everyone else was exactly as middle-aged and white and wannabe hip as them.

Sorry if that makes any film nerds feel attacked, but call a spade a spade. What was happening at the same time as this, the growth of early Heavy Metal, the birth of punk, the start of the Second British Invasion, etc., was all so much more interesting than this throwback old man milquetoast jam. The world was about to explode with wild stage performances full of the passion and creativity that hadn't been seen since the '60s. The problem is when you put that next to this, the Waltz seems so boring and predictable that you don't care if it's the last one or not.