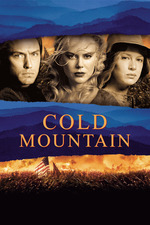 What's commendable is the scale and and production design. This movie covers a lot of ground in an interesting period (Civil War). Almost too much ground.

Something that is unavoidable to mention are the accents from Jude Law and (to a greater degree) Nicole Kidman. Jude Law at least has a good performance, but Nicole Kidman is just so drab and underwhelming to watch. Their chemistry at the beginning isn't very convincing either, although it does develop.

The two leads learning and developing is something this movie does well. If they run into someone else, it's clear they can learn a thing or too. This is especially relevant for Kidman's character who meets Renee Zellweger's character, a much more hardened woman than Kidman's. Zellweger is the best performance, and does an accent totally convincingly.

For all its faults, it is entertaining and admirable. The action is good and the production is very high end. The amount of story packed into the movie is also impressive, if sometimes overwhelming.

Once Upon a Time in Venice