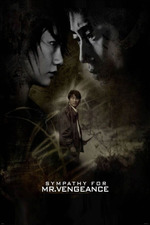 The bad image kidnappers get is because of kids getting killed. But we're different.

Shocked beyond any possible description that despite loving Oldboy to death, this is only now the second film I've seen from Park Chan-wook. At least I finally got around to it. The first of his "Vengeance Trilogy", Sympathy for Mr. Vengeance is exactly what you would expect from the man that would release Oldboy one year later. Even if Oldboy covers similar ground that this film does such as the importance of family and the eventual heartache and consequences that always follows revenge, there's plenty to admire here. The lead performances from Kang-ho Song and Ha-kyun Shin are both incredible. (We also get what to my knowledge is cinema's first sign language sex scene. A first for everything, I suppose.) I enjoyed the film's overall quiet atmosphere that then occasionally bursts open with Wook's trademark horrific violence and intense emotion. (There's a lot of sobbing in this movie. A lot.) I think there's just something with South Korean filmmakers that makes them so capable of telling impactful fucked up stories that actually serve a greater purpose beyond being disturbing just because. I think it could've moved along smoother, but by the time it came into the home stretch, Sympathy for Mr. Vengeance won me over pretty well. If you're like me and deeply enjoyed the kind of indescribably depressing experience that Oldboy is, take the time to check this out. I could go for more Shakespearean tragedies in my movies. Vengeance is a dish best served never.