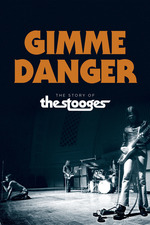 This is the first Jarmusch documentary I’ve seen and it’s masterful. We meet Jim Osterberg, aka Iggy Pop, as an older, wry, self-reflective guy who meanders fondly through his childhood, growing up in Ann Arbor, and his punk rock past. Between the MC5 and the Stooges, the Detroit area was considered the epicenter of punk rock in the 1970s. The Iggy interviews are the main thread of the film, but it’s laced with elements of the script scrawled on the screen plus animated scenes that recreate some of the adventures Iggy describes. Great editing and massive amounts of great concert footage where we see Iggy perform, always shirtless and dervishlike. He tells how he invented and perfected the stage dive. Gimme Danger is well done and will be a treat for any ’70s rock and punk rock fans. As we watched the credits roll, my friend and I were in awe of the hundreds of clearances that Jarmusch’s lawyer had to obtain for the intellectual property, people and locations used.