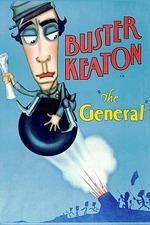 I think The General (78 minutes) is the best of Keaton's films. The film (adapted from a book titled The Great Locomotive Chase by William Pittenger) is set in the South during the Civil War and Keaton is Johnnie Gray, a railroad engineer in love with Annabelle Lee. He wants to enlist, but is rejected, and ends up being a daring hero as the engineer of the Confederate train (titled General) that helps prevent the Northern Army’s supply trains from advancing into the South. The film has lots of amazing footage that was carried out in real time, including the train chase and a scene where a bridge collapses and one train falls into the gorge below. It was a very expensive film to produce and Keaton’s career suffered as a result.

Keaton is always calm, serious and practical about the situation he’s in, even while he’s performing amazing physical feats as he keeps the General running, finding wood, chopping it and tossing it into the firebox. He doesn’t mug for the camera or overact as most silent film stars (including Chaplin) did. Keaton’s deadpan expression earned him the nickname The Great Stone Face.

In the last 15 minutes of the film, however, it was pretty horrifying to realize that I was cheering for Johnnie Gray and the South, especially when the Southern troops appeared carrying the Confederate battle flag.