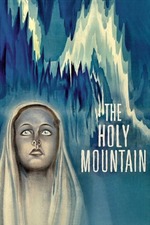 This silent film (renovated and remastered in 2002 with new score) is notable for its mountain cinematography, not for its silly love triangle plot. It's also notable as the first film appearance of Leni Riefenstahl, later known as Hitler's favorite filmmaker (Triumph of the Will, 1935). Here she plays Diotima, a dancer and the love interest of two men.