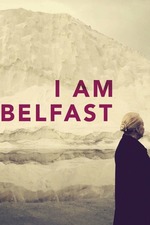 Having seen this billed as a city symphony, I had certain preconceptions about what it would be like before going in. I had (perhaps foolishly) expected something more akin to Vesnoy, Berlin: SOAGC, Man With a Movie Camera, and Manhatta. As it turns out, it shares vary little with the above.

I Am Belfast seems at times quite a profound experience, there is sorrow, there is hope, and there is beauty in the seemingly mundane. The film somehow manages to elevate itself to a state of 'greater than the sum of it's parts'.

It's not without it's flaws though. Mark Cousins for example should be banned from ever speaking in his film again. His droney voice coming across incredibly wooden as the scripted conversations with 'Belfast' happen. Far to wink wink nudge nudge at times too, as he tells us 'I like Movies' early on in the piece. You get him comparing Sir Arthur Chichester to Marlene Dietrich (I've seen the story of film, I get it Mark, you like Marlene Dietrich), and somehow finds excuse to fit in a clip from an Abel Gance film about WW1. It's like he couldn't let the film happen without reminding us just how much he loves film.

I think it's that personal side of it that lets the film down. I think if it wasn't him going to Belfast and having a conversation with the personification of Belfast, and was instead just the poetic monologues of that personification, the film would be a lot better. I also think he needs less of his 'observations' in the script. The way he makes a connection, or spots a pattern, and tries to make it into something deep and meaningful. A Wall painted Gold, the colours you see walking down a street. They just come across forced and pretentious.

The climax of the film is a 5 minute sequence in which a woman forgets her shopping on the bus, so the driver goes back to pick it up, whilst 'Belfast' weeps. Thankfully it's assembled so well with the Van Morrison song, and the emotions on camera, and the editing making us feel like is a really significant moment. On the face of it's just a random event, and yet it becomes the films emotional crescendo. And I kind of like how the film can do that, and make the mundane beautiful

I also felt it dealt with the troubles really well. That first explosion adds so much weight to a film that up until than had been a bit wishy washy. It's those events that really give the film it's poignancy, and where it's at it's most profound as it reflects on the horror of it all, and the seeming pointlessness of it all. By the end you really feel a sense of hope that that is all behind us now, and we can move forwards.

Whilst a good film, I just feel it's a bit flawed in composition/execution. For a long time I've had the desire to make a city symphony about my home town. It would be more 'none-narrative' than I Am Belfast, but none the less, I feel inspired by this film to push forwards with that, so an extra level of praise must be given for reigniting my inspiration.