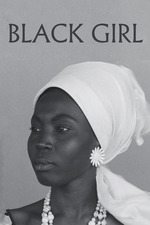 First week of 'The Letterboxd Season Challenge 2017-2018' to watch a previously unseen movie directed by Ousmane Sembène. I didn't know what to expect going into this knowing little to nothing about the director and little about the film. But I was pleasantly surprised.

Black Girl is a very powerful movie surrounding a African girl picked up off the street to work for a french family and the struggle she had to go through being a maid in that culture and time period.
Many of the positives with this movie it due to Ousmane Sembène's direction of the film providing some very beautiful and powerful shots. The scene that will stick is the shots of all significant objects close up. The music choices choices throughout the film work very effectively in showing the difference in cultures between the Africans and French people.

However in what this movie struggles in is its narrative and more specifically it run time. Due to the run time 'Black Girl' is unable to fully flesh out and develop her life to the significance of the ending. Along with parts of the film needing to be shown through flash back and narration rather than simply showing the audience how much being in this culture effected her.

Overall this movie is extremely powerful and at times very confronting but it is a well directed film which's main issue struggles with the short run time. Would recommend a watch but personally don't think I can sit through again.

Escape from the Planet of the Apes