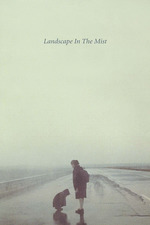 It makes sense that one of Angelopoulos' most popular films is also one of his most conventional. Landscape in the Mist is a quicker, sharper version of much of his earlier work, at a shorter runtime, smaller scale, and the mysteries and complexities coming from perspective rather than scope. That perspective is of two children who serve as our main characters. I was expecting a shorter version of a normal Angelopoulos film (normal putting it lightly), but instead much of the film gives feelings of a simpler film dealing in smaller details of life, mainly youth. Landscape in the Mist is more reminiscent of other directors working in incredible youthful stories, such as Francois Truffaut or Hayao Miyazaki, than anything I have seen from Angelopoulos made prior to this.

Not that this is in any way a step down for the director. He does inch closer to accessibility, with tighter editing and clearer, quicker moments of introspection and motivation, but his strengths shine in smaller bursts at smaller heights. It does feel like an appropriate style to take on, largely because it is a smaller-scale story, with atmosphere feeling much more like the title than any form of sprawling multi-country epic. Uncertainty in even tinier details of life makes for a more exploratory and curious Angelopoulos, rather than scanning the surface of incredibly complex subjects in emotional and understandable ways the director would address in films like The Hunters or Voyage to Cythera previous to Landscape in the Mist. It may not be his greatest stylistic choice, but it's a completely welcomed one.

Even the more common use of background music and exposition feels somewhat appropriate, in this whirlwind of ideas and thoughts of these children as they rationalize decisions and consider their own growth of emotion. Angelopoulos handles these in very specific ways, making them feel much more than easy filler. Necessary and emotional additions, rather than crutches to a more forgetful or less clever filmmaker.

Not that this film isn't at all complex. Themes of innocence are tackled and analyzed, completely confronted into this corner of worry, where even the smallest things seem so large, and the largest things surround and break spirits. Perhaps the reoccurring train gives a good semblance of these children in society as a cornered group, but I mostly just love these scenes because I love a good train atmosphere. There's something about those trains. The exposition and music that play in these train scenes feel like transitions, almost, albeit really clever transitions.

One thing Angelopoulos keeps as he always has is his precise, beautifully choreographed and lengthy visual takes. Things happen in perfect sequence, on a perfectly sizable angle, allowing the viewer's mind to wander into the sometimes inviting, other times frightening world he portrays. A good example would be the children tending to a dying animal as the large building behind them is heard celebrating and partying. This ironic celebration seems to be a theme for the director, and it's impactful every time he uses it in the various ways he does.

Even with the film's smaller atmosphere in comparison to some of the director's more sprawling works, that doesn't make its size somehow less impressive. The roads still feel connected past the frames of Angelopoulos' world, but the horizons are much foggier. It's still large, but it sets a different tone that works for the themes of the film.

This atmosphere is essential to this particular film, as the weird feelings much of the world takes on does give everything this child-like sense of importance, with every conflict lighting the world and the locations in a world-ending fashion. Not literally in the case of this film, but when the children don't explain how they perceive moments, the visuals explain for them.

Most of Angelopoulos' work builds on importance, placing piece after piece of world-building and context that already tower from the beginning. Landscape in the Mist is more immediate, maybe his most immediate film only rivaling some of his other more accessible works, like Reconstruction. It still requires contemplation, it still builds like an Angelopoulos film would, but the emotions break through quicker, the intent is clearer. It feels like a necessary addition to his filmography, and is a tremendous introduction to his work.