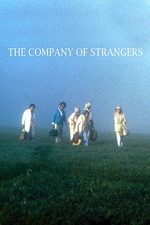 A relaxed moment of character exploration in Cynthia Scott's first and final narrative feature. It is a film which sees the beauty in smaller gestures and interactions, as they so often amount to something deeper and more complex. This film can be seen in a similar light of small and quaint on the surface, but amounting to a subtle but powerful confrontation of age and society, using peers as a form of comfort in doing so.

The National Film Board has definitely had some female voices behind it since the days of Evelyn Lambert, including the former 'Studio D' dedicated to women filmmakers, which would garner much praise through their works. Among the works Studio D produced include 'If You Love This Planet', 'Forbidden Love: The Unashamed Stories of Lesbian Lives', and of course, 'Flamenco at 5:15'. The last of that list is important in this case, as it was what gave director Cynthia Scott her earlier array of acclaim, with the short documentary earning her an Oscar. Unfortunately, Studio D shut down in 1996 amidst budget cuts to the National Film Board. While Strangers in Good Company was, to my knowledge, not associated with Studio D but instead the wider and more broad vision of the National Film Board, collaborating with First Run Features and Castle Hill Productions, Scott owed quite a bit to Studio D. As such, Strangers in Good Company, regardless of her not collaborating with Studio D on the film, is a film dominated by women voices.

If we count directors, writers, and actors as the "defining" voice of a film, or at the very least the building blocks to create a film's structure, the total of notable voices comes to thirteen. Of those thirteen, only one is a man, that being co-writer David Wilson. Femininity both behind and in front of the camera is essential to the personality of Strangers in Good Company, but not so much in a forceful or obvious way, but rather in a fashion that treats femininity as just another beautiful part of humanity. It may be called a feminist work, perhaps appropriately, but these are humans before genders, and each character's history and personality really proves this. Even still, their genders and how they conform or diverge from femininity is a major factor. Perhaps what makes many of these interactions so charming is how these people act without the restrictions of gender expectations or roles. Their age also plays a role in their recklessness, giving a view of humanity so much less restricted by any sort of societal role, not just of gender or age, but of structure or patience. The stranded characters have not much else to do but learn of each other's lengthy histories. Even the one younger women feels essential to the cast, who is played by the only women of the cast who would become a semi-established actress (the cast was made up of non-professional actresses, though Mary Meigs was a noted writer).

As these characters learn of each other on a more personal level, the audience does as well. Photographs of the women's lives are often cut into the film in a longing and nostalgic fashion, rather beautifully in fact, in how the photos often follow deeper levels of self-reflection. And this intimate style of character growth comes partially from how closely related the characters are to the actresses who play them. Just as the characters confront their age, so do the women through the often ad-libbed script. Most vividly, every character is named after the actress who plays them, turning this almost into a docu-drama in its line between character and actress. In terms of directorial style on Cynthia Scott's part, however, it takes a much more conventional drama angle.

This conventional style gives the film's performers more time and patience to explore the concepts of their adlibbing, parallel to the moments of the script that were used. Moments of Scott's brilliance do come about in the use of photographs to reflect on the past of several characters, and also the often used moments of gorgeous scenery backdrops and settings. Scott's and cinematographer David De Volpi's visuals convey both a realistic and casual looking area, but also a shining and spiritual one. It's a terrific and subtle combination that can be seen very early into the film, but may take more time before it fully feels realized in the film's tone.

And as the film goes through the emotional highs and emotional lows in confronting the age of its characters, time has played a morbid role to the film's themes. The majority of its cast has since passed away, with only one of the eight women I could confirm still being alive (Michelle Sweeney), with two others I couldn't find any specific information on, those being Cissy Meddings and Catherine Roche. The performances are so lively, and the filmmaking so timeless, it's hard to believe that these confrontations towards death were painfully real, and just on the horizon for many of these women. It's a haunting bit of pain to very likable people, turning sometimes quirky and silly personalities into something more dour. The beauty remains, but it's bittersweet. One of the film's writers, Gloria Demers, passed away during the film's making. She was one of the significant voices to Studio D, which helped Scott earn her first Oscar.

It's a humble masterpiece not simply in what it achieves regarding gender evaluation and relation. It is a masterpiece in its quiet discussion of complex topics felt not through invented characters, but the women speaking honestly behind their supposed roles. Cynthia Scott is not an obvious director, but she's incredibly clever in little motions of landscape and intimacy, looking much better than similar works despite doing only small things differently. It feels no need to exaggerate or overstep it's story, and as such its filmmaking is as silently brilliant as its characters. It is often considered a landmark in feminist filmmaking, and one of the finest in that regard. I do not disagree, even as someone admittedly on the outside looking in when addressing feminist stances and opinions. But I would rather strike the word "feminist" from its "one of the finest feminist films" claim. Not because it's inappropriate or untrue, but it would fit in just as well among the finest films of any grouping or genre. Fans of its movement should be proud, believers in the legacy of Studio D should be proud, but outsiders to both may adore this film all the same.

'Strangers in Good Company' may stand for something to a lot of us, as a type of film we don't get enough of. And yet, ignoring themes we place onto this film in an attempt to improve the future of the medium and the voices allowed to speak with it, as simply a piece of art separated from our intentions, it is extraordinary. It might be a feminist masterpiece. But it is certainly a masterpiece.