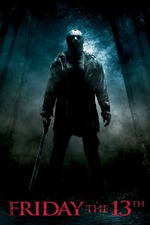 Much, much better than I expected it to be. It's a good palate cleanser after a couple of the other later Friday movies. The violence and gore effects were good. The kills were pretty inventive and (aside from some nearly incomprehensible quick cutting action) executed well.

I didn't like the sort of "humanity" the movie gives Jason. He works best as an impulsive harbinger of death for mostly one-dimensional (if that) teenagers engaging in sex and drug use. That's all that drives him and it's great. I don't need Jason to throw tantrums or hold someone captive because she looks like his mom.

All In all, a stronger remake than I expected it to be. Here's hoping someone makes another movie in the franchise and titles it Friday the 13th so that Jason and Michael Myers will both have 3 movies in their respective franchises with the same goddamn title.