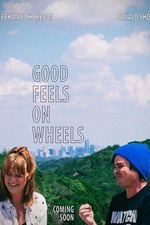 Kind of like a stoner's version of Columbus without the heavier personal stories and dynamics.

The performances are solid, particularly Stephanie Thoreson. She is charming and has a good handle on awkward comedy. Writer/Director/Co-star Ronald Short's performance as Wyatt takes a little bit of time to warm up to but ends up being pretty endearing.

Pretty charming meet-cute rom-com but doesn't really offer much to separate itself from others of its ilk. The comedy beats are okay, but there are moments where the script doesn't really let the awkward humor breathe long enough. For instance, there's a moment where the pair arrive at someone's house. The person's wife answers the door and delivers some surprising news about who they are there to see. Instead of letting the scene play out, the characters kind of catch on early and it brings us to the punchline too quickly.