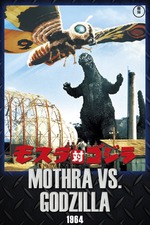 Surprised how much I enjoyed this after struggling a bit with Mothra (1961) a while ago. The destruction is fantastic and the match-up between Mothra and Godzilla is impressive. Mothra is a much more formidable opponent than I expected, even after enjoying the destruction she wrought in her movie. The other battle that ends the movie is great as well. I love the way Godzilla's strength and ferocity is exploited. Yet, it was kind of heartbreaking to see him struggle in the battles.

The trip to Infant Island and the indigenous peoples' reasons for reacting to the request for assistance the way they did is fantastic and hammers home the nuclear disarmemant theme. That theme, despite being less front and center as it was in 1954's Godzilla, leads to a really poignant final scene that feels hopeful and resonant.

Really dug this one.