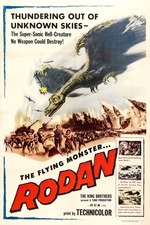 I really appreciated the procedural aspect of the scientists trying to figure out what is causing all the death in the mines. In that stage of the movie, it worked really well to hold my interest and genuinely scare me with the reveal of the larvae creatures. They were disgusting but you can't look away.

As the movie transitioned into the actual Rodan phase of the story, my interest waned a little bit. But once the action really took off, I was back in. Honda's depictions of the utter chaos of monsters demolishing cities in all of his movies are amazing. There's some very nice detail in Rodan (things like shingles being ripped off of roofs from Rodan flapping his wings).

And the imagery at the end of the movie set against an erupting volcano and lava flowing over the ground was pretty breathtaking.