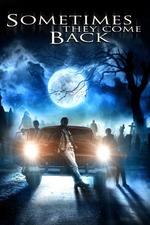 Sometimes They Come Back

Rewatched this while working from home solely because I've been working on a Top 19 Stephen King Movie/TV Works list for an eventual Tower Junkies episode.

It's currently at my number 19 spot on my list. I really don't know if it's because there's such a glut of sub-par/objectively terrible King adaptations out there or if Sometimes They Come Back is really a hidden gem of an adaptation. It will almost definitely be kicked off the list before we do this episode, though.

It's not a bad movie by any stretch, though. In fact, it honors the (excellent) short story it's based on and there's a surprising amount of subtext and growth in terms of the main character's battle against his demons (both literal physical ones and the mental ones represented by his struggle to overcome trauma and grief from his childhood).

It's an excellent short story in King's Night Shift collection and this is still a solid, if forgivably cheesy and dated, adaptation.